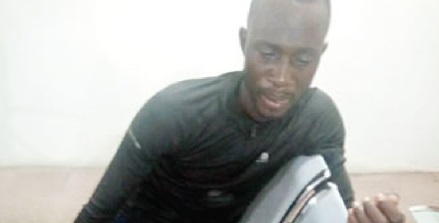 A worker with the Eko Electricity Distribution Company, Dele Ogundele, has been hospitalised after he was allegedly brutalised by a police sergeant attached to a house reportedly owned by a former Inspector-General of Police, Mohammed Abubakar.

Punch Metro learnt that the mobile policeman, Attah Aninoko, on Thursday dragged down Ogundele from an electric pole opposite the house and beat him up for disconnecting power to the house of the former IG.

Ogundele’s leg was allegedly broken by the sergeant, who was reported to have boasted that “nothing will happen.”

The matter was said to have been reported to the police at the Ikoyi division and the sergeant was arrested.

He explained that the house of the former IG owed a bill of N154,693.85, adding that the name on the bill was one Yusuf.

He said, “What we do is that anytime customers don’t respond and pay their bills, we go out with copies of their bills. When we get to their houses, we tell them what they owe and ask if they had made any payment in the last 24 hours. If they can’t produce any evidence of such, we disconnect their electricity.

“That was what we did in this case. We had two of our vehicles working in the area on that day. On getting to the house around 12noon on Thursday, October 19, a man came out and we asked for evidence of payment because we discovered that the house owed over N154,000. When he couldn’t produce it, we said we would disconnect the power. The man flared up.

“The mobile policeman came out, and while our official was disconnecting the power from the pole, he ordered him to come down. In fact, he dragged the official down and beat him up. In the process, the official sustained injuries and his left leg was broken.”

Idemudia said because the policeman was armed, other officials of the electricity distribution company were helpless and could only watch their colleague being brutalised.

He said policemen from the Ikoyi division were alerted and the cop was arrested. Ogundele was said to have been taken to a hospital.

“When he was taken to the station, he started boasting that nothing would come out of the case.

“We believe that nobody is above the law. The case should not be swept under the carpet. The Divisional Police Officer has assured us that justice would be served,” he added.

The Police Public Relations Officer, ASP Olarinde Famous-Cole, denied that Ogundele’s leg was broken, adding that the power company was being mischievous.

He said, “This people know that the property belongs to a former civil servant and they are just trying to be mischievous.

“They came and said the house owed some bills and before the residents could go in to bring out their record, they had cut off power. There were policemen in the area and they tried to intervene.

“There was nobody that suffered any broken leg or any injury. Care should be taken not to damage the good name of the former civil servant. The DPO is trying to mediate and the case is under investigation.”