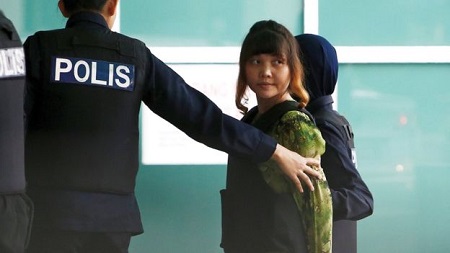 Two women charged with killing Kim Jong-nam, the half-brother of North Korea's leader, are revisiting the crime scene in Malaysia.

The pair are accused of rubbing the highly toxic VX nerve agent on Mr Kim's face as he waited for a flight.

They have pleaded not guilty to murder, saying it was a TV prank and they were tricked by North Korean agents.

Pyongyang has denied any involvement in the 13 February killing, but four men - believed to be four North Koreans who fled Malaysia on the day of murder - have also been charged in the case.

Kuala Lumpur International Airport was packed with journalists this morning as the women arrived, escorted by dozens of security officers.

Siti Aisyah and Doan Thi Huong wore bullet proof vests, and were seen in wheelchairs at one point.

They were accompanied by their lawyers and the judge presiding over the trial, local media reports.

They are expected to visit the check in hall where Mr Kim appeared to have been attacked, and the medical centre where he sought assistance.

If found guilty, the women face the death penalty. Their defence lawyers are likely to argue that the real culprits are the North Korean agents, who left Malaysia.

Mr Kim, who was in his mid-40s, was the estranged older half-brother of North Korean leader Kim Jong-un.

At the time of his death, he was believed to have been living in self-imposed exile in Macau and was thought to have had some links to China. 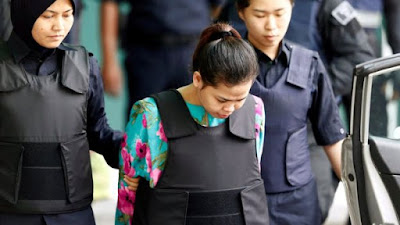