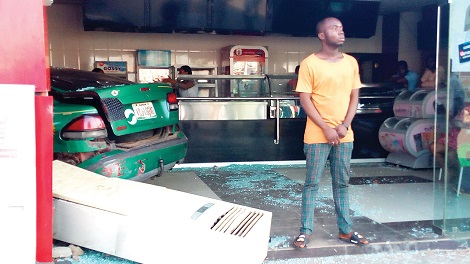 The Jabi area of Abuja was yesterday thrown into pandemonium when visibly frightened customers at the Mr. Bigg’s restaurant fled for safety after an errant Vehicle Inspection Officer (VIO) crashed their car into the venue.

According to an eyewitness, around 3:30p.m. an unnamed officer was dragging the steering wheel with a taxi driver, who was escaping arrest until the vehicle crashed into the building.

The car, with registration number ABJ 189 XD, which had a lady at the passenger seat, crashed into the restaurant, which is along Awolowo Way, injuring the lady and some staff of the restaurant. It also destroyed some property.

The officer, who had stopped the driver around airport junction, about 2km from the site of the incident, was said to have forced his way into the driver side of the vehicle and struggled with the steering until it rammed into the building.

While the incident attracted a mob, joint task force, which included the police, army, Federal Road Safety Corps (FRSC), and Civil Defense invaded the location, harassing people to leave the scene and beating a photojournalist.

In an attempt to capture the incident, the journalist, who displayed his Identity Card to the military men was beating profusely while his camera was dragged from him.

The taxi drivers, who complained about the excesses of the VIO officials, had protested against the highhandedness, threatening to lynch the officers.

The crowd was however dispersed and policemen at the scene declined comment, saying they were not authorized to speak on the issue.