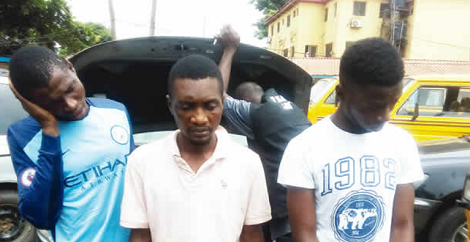 The Lagos State Police Command has arrested the driver of a hotel operator on Victoria Island, William Olowoloju, for allegedly kidnapping his boss’ younger brother and the victim’s girlfriend.

The lovers were driving out of the estate in a Ford Jeep when the abductors reportedly waylaid them at gunpoint and tied them up.

They were said to have driven the victims to their hideout in Agodo Alara village, Ogijo, Ogun State, and demanded N20m ransom from the hotelier, Edwin Azuka.

Punch Metro learnt that after the case was reported to the police, operatives of the Special Anti-Robbery Squad trailed the suspects to the den.

The Acting Commissioner of Police, Lagos State, Edgal Imohimi, who paraded the suspects on Tuesday, said the victims were rescued unhurt.

He said, “Apart from the Jeep with number plate, LND 995 ES, one locally-made gun, a battle knife and four Automated Teller Machine cards, among others, were recovered from them.

“The suspects will soon be charged to court on completion of investigation.”

Also paraded were 50 suspected cult members, armed robbers, and drug peddlers arrested in the Ikorodu, Oshodi and Lagos Island areas of the state.

“The command once again appeals to the people of Lagos to be vigilant to make the state safe and secure. Whenever you see something, say something,” Imohimi added.

Speaking with Punch correspondent, Olowoloju, who hails from Ekiti State, said he had approached his boss to give him a N100,000 loan sometime in September, but the boss turned down his request.

The 37-year-old driver, who said he wanted to use the money for his in-law’s burial, explained that he felt disappointed and met with a friend, Akindamola, who advised him to kidnap Dumebi.

He said, “Akindamola said I would get the money if I kidnap my boss’ younger brother, Dumebi. I agreed with him, but I did not know how to go about it. He said he knew somebody who could make it work. He discussed with Segun and Ayo and they said there was no problem.

“We did not hurt him and his girlfriend. I was not around when they (the gang members) demanded N20m. I went to buy drinks for the victims.”

Olowoloju added that Akindamola was released by the police on Monday.

The command, however, denied that Akindamola was released, saying he was a “soft target” the police trailed to arrest the gang members, adding that he was still at large.

Akinola, 22, an indigene of Akure, Ondo State, said the gang members spent a night with Williams on the estate to perfect their plan.

He said, “Williams invited us. He promised to give us money. We stopped the man’s car and pointed a gun at him. We drove him and the woman to Ogijo. We did not plan to kidnap the woman.

“We demanded N20m but he said he did not have money. He said he just invested his money in a business. In the night of the following day, we looked for a motorcycle and took them to a place where they could find their way back home.”

Teluwo, who owned the gun used for the operation, said, “I found the gun in an Ogun shrine on a construction site in Ikorodu. This is the first time I would participate in kidnapping.”