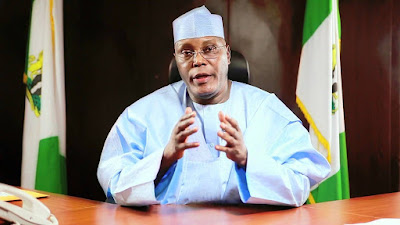 Former Vice-President Atiku Abubakar has denied reports that he has formally declared his intention to run for president in 2019.

Atiku said this in a statement by his media office on Friday.

He distanced himself from a video which was circulated on social media in which he was purported to have said he would be contesting.

The former vice-president said the video was a “bad job of bad people with bad intentions.”

He said some mischievous people were using a video clip extracted from his 2011 presidential declaration to create the false impression that he had formally declared for the 2019 presidential election.

He said such propaganda was being deliberately promoted by political opponents in order to create acrimony.

Atiku advised those involved in such “laughable and unintelligent propaganda of lies and intentional mischief to find something useful to do with their time instead of using his name to achieve their malicious political objectives.”

Describing those behind the fake video clip “as a group of incompetent and bumbling political novices who cannot see the loopholes in their own stories,” the former Vice-President advised the media to be wary of “uncritically lapping up fake news materials from groups that don’t care about their own credibility.”

He explained, “While fake news merchants don’t bother about ethics and their reputation”, the media has more to lose if they take stories from such disreputable groups without verification.

The Waziri Adamawa added that spreading false stories about any individual politician is not within the protected boundaries of free speech, and that the traditional media should take the first step by not helping fake news merchants to promote their agenda.