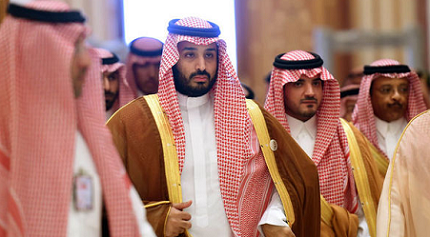 Saudi Arabia aims to confiscate up to £610 billion in money and assets from princes and business leaders in its crackdown on corruption, it has been claimed.

The government is swooping on members of the country’s elite as it looks to transform the conservative state into a modern country that is no longer dependent on oil.

Its latest purge has seen leading businessmen and over 60 princess, officials and high-profile Saudis arrested so far.

And a government source told the Wall Street Journal they were targeting a huge sum of money as part of the clampdown.

He said: “They reckon they could get around two to three trillion riyals from these people.

“That’s the number they are talking about.”

The kingdom’s central bank has already frozen a huge number of accounts as it bids to bring cases against some of those arrested.

Many of those frozen assets are said to be based abroad which will mean a long and complex process.

Saudi Arabia's Crown Prince Mohammed bin Salman has ordered the a crackdown, the latest in a wave of frenetic changes in the kingdom over the past two years.

Dozens of royal family members, officials and business executives have already been held in a new purge announced on Saturday.

A number of other individuals suspected of wrongdoing were detained in an expansion of the crackdown, widely seen as an initiative of the powerful heir to the throne.