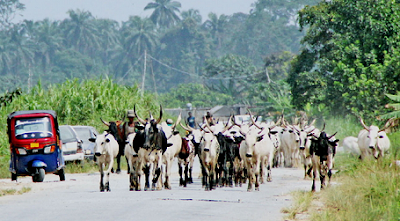 The National Coordinator of Miyietti Allah Cattle Breeders Association of Nigeria, Benue State chapter, Garus Gololo, who spoke to our correspondent on Saturday, said the deceased committed suicide after he lost 200 of his cows to hunger and lack of water.

The Benue State Government had, on November 1, commenced the implementation of its anti-open grazing law, leading to some herdsmen relocating to other states.

Gololo said since the commencement of the Benue anti-open grazing law, Fulani herdsmen had lost about 600 cows due to poor feeding and inaccessibility to water.

He lamented that Abdulkadire, who had 22 children, cried and jumped into the river out of frustration when he discovered that 200 out of his 500 cows had died where they were camped, looking for a means to relocate from Benue State.

The herdsmen’s leader said, “The man killed himself simply because there is no place for his cows to graze. He was to relocate to the Awe LGA of Nasarawa State but information got to us that the area was occupied and no herdsman or herdsmen should cross over to the area again.

“We are calling on the Federal Government to intervene to quickly make provision for herdsmen in Benue State before they lose everything they have.”