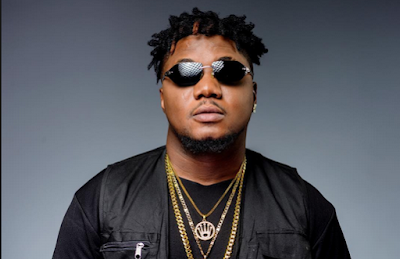 Music act CDQ in a chat with Saturday Beats speaks about missing his dad and how his death automatically made him the head of his family being a first child. He also spoke about quitting a banking job for music. Also recalling one of his intimate time with his late dad, CDQ recalls he was just 16 when his dad introduced a condom to him. Hear him;

“I was very close to my father who died in 2008. I learnt that he was in his office when he suddenly slumped and he was rushed to the hospital. He was in the hospital for some time before he finally died. His death really affected the family financially. Also, my father was our guide and he advised us on every life situation. Continue...

“When I was 16, my father called me and said that he knew that at my age, I would be seeing girls. He gave me a condom and told me that if I must have sex, I should ensure I wear one. He made it known that he was against pre-marital sex but I should always protect myself if I must engage in the act. He also always advised that as a man, I should always ensure that I worked hard and earn money because by doing so, the ladies would chase me. I have really missed that intimacy and friendship I had with my dad. Also, there was the financial aspect. My father was the one that took care of his extended family. My father taught me not to depend on anybody,” he said.

Speaking on quitting his banking job for music and not having the courage to tell his widowed mom, the singer said;

“There is no one that would leave a bank job for music that would not be scared of the career change but at that time, I had a lot of pressure on me. I lost my father when I was still in school back then in 2008. That period was when Lagos State was doing road expansion so they broke the two shops my mother had on Alaba Expressway. I am the first child of my family so I had to fend for my family. I had a lot of people who depended on me, so it made the decision even tougher for me when Mastakraft advised me to leave the banking hall for the recording booth. I listened to his advice and took music seriously. He promised me that after six months, things would change in my life if I embraced music squarely and his prediction came to pass.

“I did not tell my mother when I quit my job, she did not even know about my decision. She thought I was working in the bank because I used to give her money from what I made at small shows I performed at. She did not know I was a musician till I started to prosper,” CDQ said.