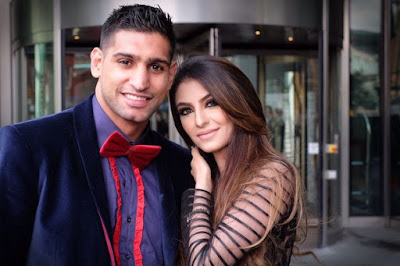 Amir Khan has said his wife's unexpected pregnancy saved their marriage. Earlier this year, the British boxer and his partner, Faryal Mahkdoom, suffered a very public separation - caused by both social media jealousies and family feuds.

That a reached a head in the summer, when the pair officially went their separate ways.

But now, as he prepares to head into the Australian jungle for ITV's I'm A Celeb, he says his wife's shock conception sparked a reconciliation. "We have to think of the kids. I want to be a family man,” he said.

"We both sat down and thought, ‘Look, we’ve got a family, we’ve got a little girl’. I think we have to just move forward and move on from things. I’m ready to make some big changes in my life.”

He also made specific reference to his bizarre allegations that Faryal, from New York, quickly found comfort in Anthony Joshua.

“I did a lot of silly things. When I accused my wife of messaging Joshua, it was all just nonsense from the start," he added. “I lived my life on social media. I assumed things which were wrong and I really embarrassed myself.

“I’d just had my hand operation and wasn’t fighting as much, so I was frustrated about not being in the boxing ring and not being able to train. I think that made me hot-headed.”

“It was all just nonsense from the start."