Ex-USA Gymnastics Doctor Pleads Guilty To Criminal S*xual Conduct... In All He Assaulted 125 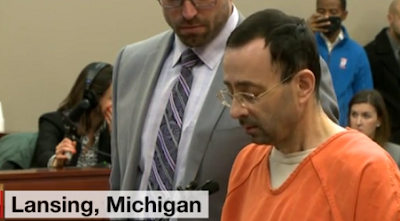 Three of the charges applied to victims under 13, and three applied to victims 13 to 15 years old. Other charges were dismissed or reduced as part of a plea agreement. All 125 victims who reported assaults to Michigan State Police will be allowed to give victim impact statements at Nassar's sentencing in January, according to the plea deal.

"For all those involved, I'm so horribly sorry that this was like a match that turned into a forest fire out of control," he said. "I have no animosity toward anyone. I just want healing. ... We need to move forward in a sense of growth and healing and I pray (for) that."

Judge Rosemarie Aquilina said Nassar violated the trust of his patients, and she praised the victims for coming forward.

"You used that position of trust that you had in the most vile way to abuse children," she said.

"I agree that now is a time of healing, but it may take them a lifetime of healing while you spend your lifetime behind bars thinking about what you did in taking away their childhood."

Aquilina continued, "You violated the oath that you took, which is to do no harm, and you harmed them selfishly. ... They are superheroes for all of America because this is an epidemic."

Dozens of women, including several gold-medal winning members of the famed "Fierce Five" team of American gymnasts, have accused Nassar of sexual misconduct in his role as the USA Gymnastics doctor.

Nassar was the team physician for the Michigan State University gymnastics and women's crew teams as well as an associate professor at MSU's College of Osteopathic Medicine. He worked at MSU from 1997 to 2016 and served as the USA Gymnastics physician through four Olympic Games.