Photo: Man Caught With 7 Human Skulls Wants Police To Hand Him Over To God 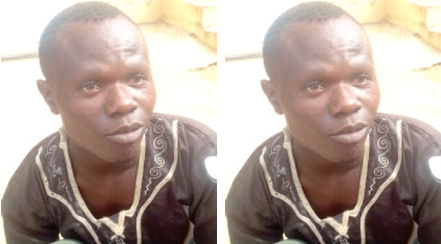 A suspected ritualist, caught with seven human skulls exhumed from a cemetery, has urged the Police to hand him over to God for divine punishment, because that is what he would do if anyone had exhumed the remains of his parents or relations for ritual purpose.

The suspect was among some suspected criminals paraded by the Kwara State Police Command yesterday, in Ilorin, the state capital.

The suspect, who identified himself as Olayinka Abbas Akeem, told Vanguard that he was lured into the business by his friend, Tunde a.k.a. Bante, who is now on the run.

Olayinka said the friend convinced him that the surest way to get rich is via money rituals, as that was what everybody was secretly doing to live a comfortable life.

Olayinka, nevertheless, expressed remorse after being caught, particularly when his parents visited him at the Police cell and the exposures he would suffer in the public.

The state Commissioner of Police, Lawan Ado, during the parade, disclosed that the suspect was arrested along Ilorin-Ajase Ipo Road with a sack containing the seven human heads, which were exhumed from a cemetery located at Igbo Owu community in the Ifelodun Local Government Area of the state on Tuesday.

The Police boss, who said that the suspect allegedly exhumed the heads for ritual purpose, added that the Police was on the trail of the second suspect, who is on the run.

He added that the suspect will soon be charged to court as soon as the investigation was concluded on the matter.

The Command also paraded five other suspects, including a serving Nigerian Army sergeant, allegedly caught over the theft of a new green-coloured Land Rover SUV belonging to Minister of State for Niger Delta, Professor Claudius Daramola.

The police commissioner, who described the suspects as belonging to an interstate robbery gang, said they had stolen the vehicle at the residence of the Professor at Tanke area of Ilorin metropolis.

The Police boss said the military man, a deserter, and the other suspects had confessed to the crime.