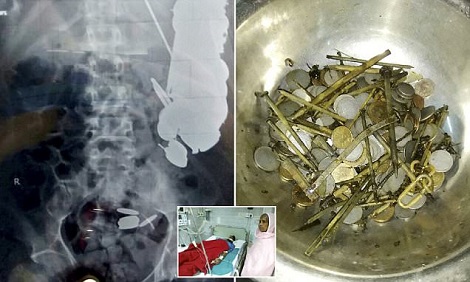 Surgeons treating a man with suspected food poisoning were stunned to discover 263 coins and 100 nails in his stomach.

Maksud Khan, 35, was admitted to hospital with abdominal pains and doctors performed an endoscopy to investigate the cause.

But they were amazed to find hundreds of coins, 1.5kg of nails, dozens of shaving blades, shards of glass, stones, and a 6-inch piece of rusted iron shackle.

Mr Khan is believed to suffer mental health problems and did not inform his family or friends of bizarre eating habits.

Dr Priyank Sharma, who led the surgical team, said: 'The patient was complaining of stomach pain, so we thought of getting an endoscopy done.

'We were shocked to discover coins, nails and nut-bolts in his stomach. It's the first time we've come across such a case in our career.

According to the doctors, Mr Khan worked as a three-wheeler driver and would often swallow coins given to him by customers.

He had been complaining of stomach pains for three months.

Relatives say he had slipped into a depression and might have got hooked on eating metal objects.

'Whenever he felt the urge to ingest a coin, he ingested it with water,' said a family member.

Amazingly, the coins and nails never caused any pain or problem initially.

'The operation was done in the nick of the time as some of the nails lodged had pierced his stomach, caused bleeding and resulting in loss of haemoglobin,' said another doctor who operated on Khan.

Khan is now out of danger and has vowed not to ingest any of the objects again. 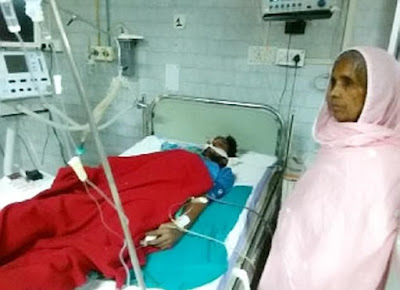 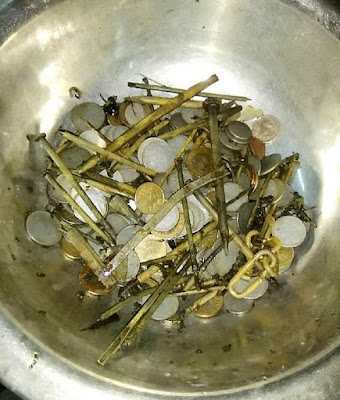