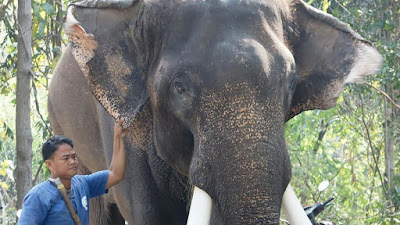 A ‘celebrity’ elephant has crushed his owner to death in Thailand this week. The accident, which has sparked fresh debate over the kingdom’s animal tourism industry, took place on Monday morning in the northern city of Chiang Mai.

Owner Somsak Riengngen had just unchained the five-tonne elephant Ekasit, who has starred in a number of feature films and commercials.

Ekasit then took a few steps before reversing course and attacking 54-year-old Somsak, who was on the ground.

Wuthichai, who described Somsak as an ‘elephant expert’, said the 32-year-old animal was in musth – a state of high aggression accompanied by a hormonal surge – when the accident happened.

Ekasit, who according to a zoo official appeared in Thai and foreign films as well as several television advertisements, was being temporarily housed at the zoo under a contract due to expire in April.

The elephant is best known for appearing in the Thai martial arts film series ‘Ong Bak’.

Thailand is notorious for its elephant tourism trade that sees the animals performing in circuses, giving rides, or hired out for other forms of entertainment.

A July report by World Animal Protection found that twice as many elephants are pushed into Thailand’s tourism industry as the rest of Asia combined, with most kept in ‘severely inadequate conditions’.