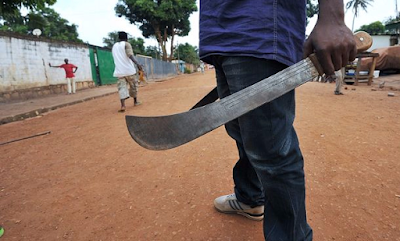 Three children were killed and a teacher was injured when a man armed with a machete stormed a primary school in northeast Nigeria, two residents told AFP on Thursday.

The attack happened at about 9:30 am during break time at the Jafi Primary School in Kwaya Kusar, in the southwest of Borno state.

Kasimu Ibrahim, who lives near the school, said the attacker — described as being in his 30s and with a neat beard — headed to the nursery section of the school.

“He entered a class and began attacking pupils. He hacked two boys to death, aged about five and seven,” he told AFP by telephone.

A third victim — an eight-year-old girl — died on the way to a hospital in neighbouring Gombe state, he added.

The teacher managed to raise the alarm after she was struck in the hands and the attacker was overpowered.

Habibu Suleiman, who also lives nearby and like Ibrahim rushed to the scene when the alarm was raised, gave a similar account.

Both said police took the attacker into custody and then to a hospital, where he was under armed guard.

“Schools in the town have all closed, both public and private,” said Suleiman.

Kwaya Kusar is some 230 kilometres (150 miles) southwest of the Borno state capital, Maiduguri, which has been at the epicentre of Boko Haram’s Islamist insurgency.

Ibrahim and Suleiman both blamed the jihadists but while Boko Haram has targeted schools before, Thursday’s incident did not fit a pattern of previous attacks.