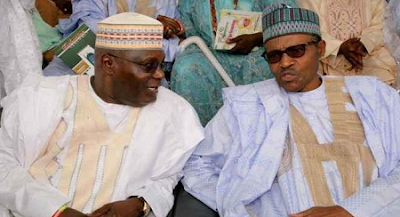 The Presidency, yesterday, said President Muhammadu Buhari was never banned, at any time, from entering the United States (US).

It spoke in response to the claim by former Vice President Atiku Abubakar that “for about 15 years, Buhari could not enter America on account of religious considerations”.

“This fictive concoction being passed off as truth is mind-bogging, coming from a former Number Two man of Nigeria, who should know the truth. At no time was President Buhari, as a private person, ever forbidden from entering any country in the world”, the Presidency said.

Atiku had made his claim in an interview published by Ovation magazine, yesterday. Asked by the interviewer, Dele Momodu, the Publisher of Ovation, who conducted the interview under the column, One-on-One Session, on why the former Vice President had not been able to visit the US, he had said:

“It is the sole prerogative of America to determine who they want in their country or not. I’m not running away from America. I applied, but wasn’t issued a visa. However, they did not decline me categorically either. They’ve only said my application is going through administrative process. This is not peculiar to me. For about 15 years, Buhari could not enter America on account of religious considerations. The current Indian Prime Minister, Modi, suffered the same fate for years. Today, he is being treated to red carpet treatment in America.. I fly to different parts of the world, including Europe, if America wanted me, it would be so easy for them to reach out to their allies…”

A statement by the Special Adviser to the President on Media and Publicity, Mr Femi Adesina, went on: “Rather, the rest of the world has always held Muhammadu Buhari as a man of sterling qualities, strong on integrity, transparency and accountability. The same testimony is still borne of the Nigerian President by many world leaders today. It is curious that former VP Abubakar had been asked why he had not visited America for over a decade, something that had been a stubborn fact dogging his footsteps. Instead of answering directly, he begged the question, saying Buhari also had been disallowed from entering the same country for 15 years, before becoming President.

We hereby make it resoundingly clear that what the former Vice President said only exists in the realm of his imagination. If he has issues to settle with American authorities, he should do so, rather than clutch at a straw.”