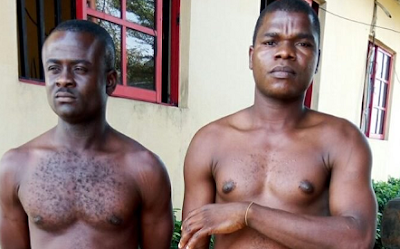 A fake Commander of the Federal Special Anti-Robbery Squad (F-SARS), Kenneth Obunwa, and a fake officer of F-SARS, Oluwagbenga Abe, have been arrested in Rivers State by the authentic operatives of Akin Fakorede-led F-SARS and they will soon appear in court.

Obunwa, an indigene of Egi in Ogba/Egbema/Ndoni Local Government Area of Rivers State and Abe, who hails from Ijero-Ekiti in Ekiti State, both married with children, were arrested Tuesday morning by operatives of F-SARS at Igwuruta near Port Harcourt in Ikwerre LGA of Rivers state.

A landlord in Igwuruta, Mr. John Onwaduegbo, told a reporter of  The Nation newspaper Tuesday evening in Port Harcourt that Obunwa and Abe, who he said introduced themselves as operatives of F-SARS, came around 9 p.m. on Monday to the house of Pastor Moses Finan and held him (Finan) and his younger brother, Silas Lohsing, hostage for some hours and extorted money from them, brandishing a machete.

Onwaduegbo insisted that he saw Obunwa with the machete, which Abe said he was always keeping in his Volkswagen Golf car, which was still at the headquarters of F-SARS in Port Harcourt, as at the time of filing this report.

Obunwa and Abe, who claimed to be members of Kaduna-based Vigilante Group of Nigeria, while separately speaking with The Nation in Port Harcourt, stated that in the last six months, they had been involved in voluntary night security job in Igwuruta, claiming to be known by the area’s monarch and the Divisional Police Officer (DPO) of Igwuruta Divisional Police headquarters, having earlier arrested many armed robbers and other criminals in the area, who they claimed were handed over to the DPO.

Rivers Commander of F-SARS, who is also a lawyer, while speaking on the arrest, disclosed that at 7 a.m. Tuesday, F-SARS received a distress call that Obunwa and Abe, who claimed to be operatives of F-SARS, accosted Pastor Finan and his younger brother and subjected them to thorough search in their compound at Igwuruta, with undisclosed sum of money extorted from them.

Fakorede, a Chief Superintendent of Police (CSP), who hails from Ekiti State, said: “The suspects impersonated as operatives of F-SARS and they have been doing it for a while. We quickly responded to the distress call, because the members of the public adequately utilised the distress lines that we gave. We traced the impersonators and we arrested them.

“We have a lot of miscreants who are impersonating security agents, especially F-SARS, thereby harassing, intimidating and extorting money from innocent members of the public, who ought to be very vigilant.

Rivers Commander of F-SARS also disclosed that the two suspects would be thoroughly investigated and they would soon appear in court, to serve as a deterrent to other criminal-minded persons.