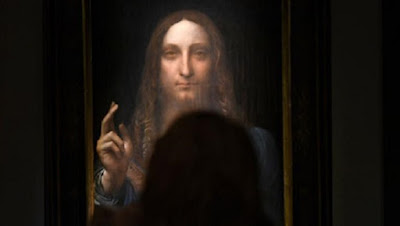 “Salvator Mundi,” a painting of Christ by Leonardo Da Vinci that recently sold for a record $450 million, is heading to the Louvre Abu Dhabi in a coup for the bold new museum, it announced Wednesday.

The Louvre Abu Dhabi, the first museum to bear the Louvre name outside France, has been billed as “the first universal museum in the Arab world,” in a sign of the oil-rich emirate’s global ambitions.

“Da Vinci’s Salvator Mundi is coming to #LouvreAbuDhabi,” the museum said on Twitter in Arabic, English and French.

The post displayed an image of the 500-year-old work but did not identify its owner.

Auction house Christie’s has also steadfastly declined to identify the buyer, whose purchase in New York for $450.3 million stunned the art world.

“Congratulations,” Christie’s said in a tweeted reply to the Louvre Abu Dhabi.

The New York Times on Wednesday, citing documents it reviewed, identified the buyer as Saudi Arabia’s Prince Bader bin Abdullah bin Mohammed bin Farhan al-Saud, whose country forbids the official worship of Christ or any other religion except Islam.

Prince Bader has no history as a major art collector but is a friend and associate of Saudi Arabia’s powerful Crown Prince Mohammed bin Salman, the Times said.