Revealed: The Popular Prophet Who Sleeps In Coffins In Lagos 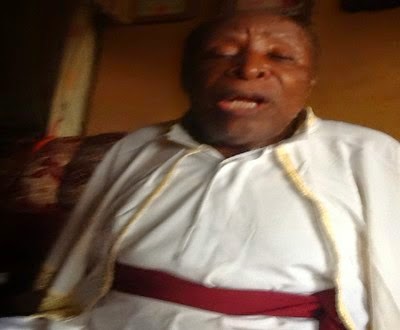 Prophet Pa Samuel Olawale (a.k.a Kogberegbe) sleeps inside coffin and in the grave preaching the gospel. It is one story that will indeed shock you and expose you to things going on that you are not aware of.

Conspicuously displayed on this Mountain of Prayer is a big van with the inscription:

In the said van is a big white-creamy painted coffin covered with a black cloth having the following words:

‘THIS IS THE END OF YOUR LIFE AND YOUR POST’ inscribed on it, all in capital letters

Fear will normally envelope most people seeing for the first time a coffin draped with black cloth and a grave dug by the altar . This is, however, a familiar sight to the congregation of this church. They've grown used to it.

What is the connection between an empty coffin and the church? Why should there be a grave by the altar?

Speaking to The Nation on why he keeps both strange and curious objects, the spiritual leader and founder, Pa Samuel Olawale, who is in his 80s, declared ” Yes, it is true that I have a coffin covered with a black cloth in the church , it is in a big van .Not only this, I have a big hole dug by the altar. You can go and see it, take the picture .But for the grave or the hole, it is by the altar. And next time, I will open it for you while I am there .The two strange objects are pregnant with meanings .I have reasons why I am keeping them there.”

He said: ” Yes it is true that I am carrying the coffin about while preaching and what I am trying to point out is that no matter how wealthy you are you will not leave this world with these money , it all ends here .You will not go into the grave with your wealth or with money , be you a civil servant who stole money , be you an armed robber, be you a landlord or a caretaker, your money and wealth ends here the moment you are dead.”

He continued: “Any time I go out, I would at times sleep in the coffin, telling everybody that that is how we will end .Yes, we should remember this. If you are buried with expensive coffin, clothes and jewelleries, all will be stolen from you in the night and your carcass will be left. To me, life has no meaning until we come to God. Things are going wrong in this world and we should mend our ways.”

Kogberegbe added: “Yes, I even sleep there (in the coffin and the grave) at times too, to let us know that we will all end up in the grave ”

On whether people read different meanings to it , he replied: “Oh no, no, they all know that we are preaching the word of God. It is just to let us all know that there is nothing in this life. This is an ephemeral world, the grave is for prayer and we open it every year while praying on the mountain.”

On what it is in the grave, the old man said, “Nothing , it is empty, nothing .”

When this reporter requested to see the coffin and the grave, the old man did not hesitate as he called one of his disciples, Joshua Samuel, to take him there.

Road to the mountainThe road to the church’s mountain is about three kilometres from the residence. It is along Ikotun/Ejigbo Road. The big church is located in a compound on the expansive mountain.

On the mountain is also a vehicle, and inside it is an object covered with a black cloth. The reporter asked the guide, Samue,l to open it. The guide first of all screamed, “Holy Jah ,” and prayed. He then removed the cover for this reporter to see the cream – coloured coffin with the words: ‘THIS IS THE END OF YOUR LIFE AND YOUR POST’ inscribed on it. And after the reporter had taken some shots of photographs, the guide again thanked Jah for His mercies and then covered it again.

According to the guide, Kogberegbe is a bold man who is a man of God worshipping God Almighty. He said while evangelising with the bus, they carry the coffin about and would stop once in a while to bring out the coffin. In his words, “We carry the coffin from the vehicle; it is normal coffin .We are about four people who carry it while I would be in my church warrior soutane dress.”

Asked to comment on the motive behind it, he said: “Baba is trying to show the world that at the end of everybody in this world, irrespective of his status, whether you are rich or poor , whether you are a witch or wizard, whether you have children or childless, whether you are a tenant or landlord, this is how and where we will all end .Baba would with a bell in his hand sleep in the coffin in the public and be shouting on top of his voice to everybody to come and see how everybody would end. It is a big lesson for us all, and it is very interesting. It is time we should all change from our bad behaviours and turn to Christ”

Encounters with the evil spirit

Kogberegbe also spoke to this reporter about his encounters with the evil spirit. He said “I remember that we used to trek from Somolu to this mountain several years ago. We faced many challenges. I can remember when on a midnight as myself and two kids were going to the mountain, we got to the base of an Araba tree (mighty tree), we saw a strange light that beckoned at us from the tree top and we heard the voice that said ‘This stupid boy (Kogberegbe) has come to disturb us again.’ But trust my God, nothing happened to me. I prayed and the tree got dried up .It is God’s work. The evil spirit attempted to stop me from worshipping God , but no evil spirit had the power. Again, at Ojuwoye, they (evil spirits) fought us, and again I commanded the tree to dry up and it happened. It is the work of God. Only God knows what havoc the tree could have caused. You know a man with swollen scrotum cannot be a goalkeeper. And it is God’s work, not of mine.”

Call him a stubborn agitator. Label him a non conformist; he is a different person entirely from many other preachers. No wonder he is nicknamed Kogberegbe (A no nonsense man). He said “My name is Samuel Olawale. When God called me, people started calling me Kogberegbe, meaning a man who does not tolerate nonsense.”

He speaks with authority, and his congregants listen with rapt attention. In his living room, he conducts services and counsels those who come for counselling and prays for them too. There are portraits of Jesus Christ and of some Saints hung on the walls. In his living room are big rubber drums of water which he prays on to become ‘holy water’ and this he gives to people to heal them of their ailments.

He prays for people who come to him for prayer. His voice is heard as he prays. People of all status mill around him for prayer. Whenever he is praised that his prayer works, he would tell you that it is not his handwork but God’s.

Immediately he was told that he had a visitor from the press, he humbly left the congregation to attend to this reporter. He is loved for his humility, passion for mankind. One thing he is noted for is that he does not tolerate nonsense in his church. In fact, he is treated as a king as his followers and other people kneel down to talk to him.

A disciplinarian to the core, in the presence of this reporter, Kogberegbe acted out his name as he scolded one of his followers for removing his soutane and going to another place when the service was still on. He admonished him for not respecting God.

Genesis of his life

He told The Nation that: “I have been in evangelisation since 1957 when I was called and started it .It is God that called me. I was once a police officer but that was a long time ago. If God wanted to call you , he will do so immediately and you will not steal, will not take another man’s wife, will not be dubious. You must not tell lies because you want to be rich. Many become prophets because of money. Most of you who are practicing journalism are fraudsters. People are afraid to walk in the night. Many of you reporters are fake and go about taking pictures, interviewing people about and collecting money.”

He spoke about the Boko Haram: “Now there is the problem of Boko Haram, and you don’t know those praying for the country. Many of the prophets are doing that silently. Those pastors and prophets using human blood for many things are devilish and will go to hell fire. But God knows the truthful ones. Well, only God knows who is worshiping Him. Today, the prophets and pastors are doing what they like. But I love the Catholic, who suffer a lot and they are doing well. The Pentecostal Church is trying their best too.”

But he added, "He (God) said it is not those who called me God, God that will come to His Kingdom. It is not all of us prophets, pastors, men of God that would go to heaven."