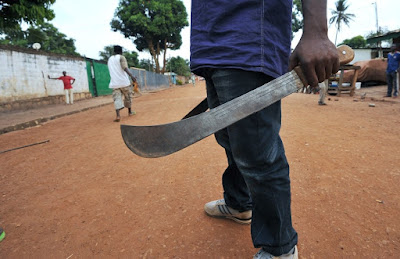 Tragedy struck in the Kogi State Polytechnic, Lokoja, as a Higher National Diploma (HND)student of the institution, Mr Akoh Samuel, was allegedly macheted to death by his friend and roommate.

The suspect, Agba Victor, an Accounting student in HND 1, who was suspected to be mentally unstable, allegedly killed his friend with a cutlass.

It was gathered on Wednesday that the suspect picked up a cutlass and attacked the deceased in his room, macheted him many times without any reason.

Victor was said to have carried out the act in Felele area of the town, where many students of the institution reside.

The investigation further revealed that the suspect and the deceased were bosom friends from their National Diploma (ND), days in the same institution.

The late Samuel of the department of public administration was said to have died on the way while being rushed to the State Specialist Hospital, Lokoja, following machete cuts he on his head and neck.

The suspects, who have been handed over to the police, was said to have claimed that he didn’t know what got into him.

Speaking on the development, the Public Relations Officer (PRO,) of the Polytechnic, Mr Luke Yakubu, told newsmen that the suspect on Sunday night started acting funny towards his roommate.

He said,”When the late roommate and neighbours discovered this strange behaviour coming from Victor, they took him to the Church for prayers.

”They were best of Friends since their National Diploma days and also attend the same fellowship. Later that night, nature caught up with the deceased, and his friend used the machete to kill him.

”After he exhibited this act, he told us that he threw the cutlass inside a well. He even came back to the room where the incident occurred without running away.

”The Police are still carrying out their investigation, because he was not mad when he gained admission into our institution. All this so-called strange behaviour started on Sunday,” he explained.

The case has been transferred from the B Division of the Nigeria Police Force Lokoja to the State Criminal Investigation Department.