Guatemala To Move Embassy To Jerusalem 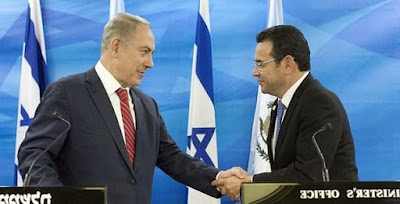 Guatemala’s president has announced that the Central American country will move its embassy in Israel to Jerusalem, becoming the first country to follow the lead of US president Donald Trump in ordering the change.

Guatemala was one of nine countries that voted with the United States and Israel on Thursday when the UN general assembly overwhelmingly adopted a non-binding resolution denouncing Trump’s recognition of Jerusalem as Israel’s capital.

Trump didn’t set any timetable for moving the US embassy from Tel Aviv to Jerusalem, and neither did Guatemalan president Jimmy Morales.

In a post on his official Facebook account on Christmas Eve, Morales said following talks with Israeli prime minister Benjamin Netanyahu, he decided to instruct the foreign ministry to move the embassy.

No other country has their embassy for Israel in Jerusalem, though the Czech Republic has said it is considering such a move.