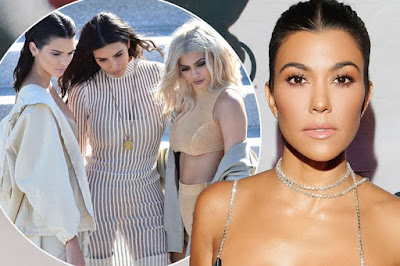 From Taylor Swift to Blac Chyna, the Kardashians have rowed with them all — but one of the sisters likes nothing more than a feud within the family.

Kourtney Kardashian, the eldest of the clan, has had several explosive fall outs with the rest of the gang.

From fights about business, to jealousy and brutally cutting jibes about her looks, Kourtney doesn't take any nonsense from Kim, Khloe, Kylie or Kendall Jenner.

Here we take a look at all the times Kourtney has fallen out with her famous family and why you don't want to mess with her.

There is no sister that Kourtney has rowed more with than Kim, 38.

She'd tried to arrange a photoshoot but Kourtney proved difficult to organise, leading Kim to ban her from the shoot all together.

Kim called her the "least exciting to look at" and Kourt branded her an "evil human being".

When the episode aired they took the argument to Twitter , Kourt said her prority was being a mum which mum-of-four Kim took as a personal insult.

In this Sunday's episode the pair are at loggerheads again when Kourt breaks down in tears.

Kim called her the "biggest, ungrateful b***h" and said she had the "lamest style".

Some of their more classic scraps include the moment Kim wept as she lost her earring in the sea, to which Kourt told her "Kim, there's people that are dying".

Khloe and Kourtney are the closest of all the sisters, but that doesn't mean they haven't had their share of fights.

They once fell out when Kourtney was pregnant with her first child Mason, now eight, and she got back together with now ex boyfriend Scott Disick.

Khloe and Scott had a row and she slapped him hard across the face.

Kourtney was seething, telling her sister she was "so disrespectful" and had "crossed the line".

Luckily, the trio have all made up, even though Kourt and Scott have long broken up.

While Kendall is one of the most drama free of all the sisters, they have had their moments.

Earlier this year that had a huge falling out when Kendall didn't want her sister hanging out with her friends and had to tell her to act her age.

In response Kourt branded her "so f**king annoying" and a "lunatic".

Luckily, the pair managed to patch things up.

Last year Kylie and Kourtney had a falling out just before Christmas, with the duo making an announcement on Instagram .

Kourtney said: "We had a tiny sister fight two days before this. This was our make up cuddle."

Kylie responded in the comments by writing "tiny" and with a love heart emoji.