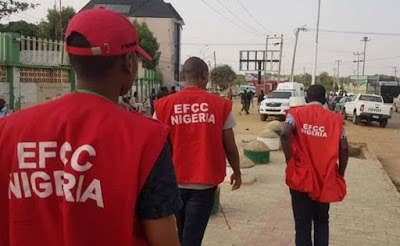 The Economic and Financial Crimes Commission (EFCC), Uyo Zonal Office, has arrested three men in Uyo for impersonating the staff of the Commission.

According to him, the suspects are Norbert Rampa, 51, Patrick Essien, 50 and Gabriel Daniel 32.

He said that the trio along with other members of their team had last year September paid a courtesy visit to the Commission’s Uyo office, under the auspices of Grassroots Development Advocacy Initiative (GDAI).

“They claimed that the initiative was a registered organisation with the National Anti-Corruption Coalition (NACC).

“During the visit, its national director, Essien spoke extensively on the several training that the members had gone through to ensure grassroots engagements in budget processes, aimed at sustaining the fight against corruption.

“They, however, requested that they be granted operational powers, to which the Zonal Head, Mr Garba Dugum refused and advised them to rather report all perceived corrupt practices to the commission.”