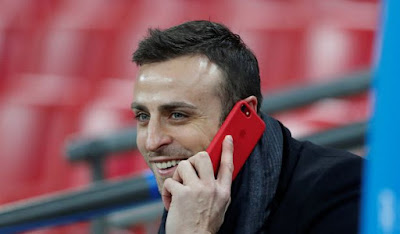 The Bulgarian forward was a fan favourite wherever he went in his career, which included Premier League stints at Tottenham , Manchester United and Fulham .

Often praised for his individualism, Berbatov has been without a club since leaving Indian Super League side Kerala Blasters last year.

On the nine-year anniversary of his hat-trick for Manchester United against Liverpool in the Premier League at Old Trafford, Berbatov uploaded footage of a stunning overhead kick he scored in that 3-2 win to his Instagram Story, before posting a longer statement along with footage of some of his other goals.

The statement goes as follows:

On this special day today, if you don't know why, check the story, I decide to share this with you, which I was preparing to post a while ago, but didn't... I don't know why...

"I know some of you already thought that I retired, and now maybe you are like WTF Berbs we know that you don't play, but I did try to find something (a club) last year. Didn't happen.

"So, someone told me I need to say something, and seeing that people were asking me, especially back home, I need to give a farewell message! So, here it is!

My last game was more than one year ago, so I think its the right time now to stop and its long overdue!

"Although when I think about it, its never The End, because I will stay in the game in one way or another, the time has come to say that after almost 20 years playing football I am stopping with my professional ACTIVE football career!

"I will miss it! I will f***ing miss it! Everything! The games, trainings, the goals, preparations, the pressure, my teammates... the roar of the fans when I scored another banger.

I was blessed and worked hard to have the opportunity to play with one of the best ever and against some of the best ever! And coming from small country this makes it even more special for me!

"I had my highs and of course some lows in my career, won my fair share of trophies, score some goals along the way as well! I played the way I wanna play, and I scored the goals I wanted to score!

"Thank you to all the people who helped me develop, and became the player I always wanted to be!

"Thank you to all my former teams my teammates and my coaches and staff! It was a pleasure!