Lagos Woman Sues Husband... Then He Sues Her Back For Taking His Picture In Court 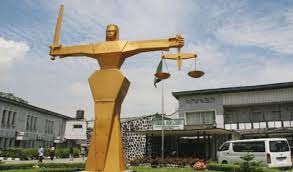 33-year-old woman, Adeola, who allegedly took photographs of her husband without his permission, was on Thursday docked before an Ogudu Chief Magistrates’ Court, Lagos.

Adeola is facing charges of causing a breach of peace and disorderliness, according to the News Agency of Nigeria.

Prosecutor, Donjour Perezi, said that the defendant committed the offences on May 23 in the court premises.

Perezi told the court that Adeola, who had sued her husband, Alexander over a different matter on May 23, instructed one Olusegun to take his photograph in the court premises.

The defendant, however, pleaded not guilty to the charges.

Chief Magistrate Ejiro Kubeinje granted bail to the defendant in the sum of N100, 000 with two sureties in like sum.

Kubeinje said that one of the sureties must be a clergyman, a community leader or a traditional titleholder.

He adjourned the case until October 2 for mention.