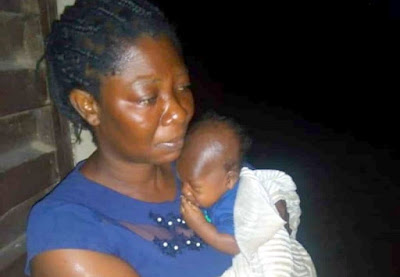 A 39-year-old woman, Mercy Momoh, is currently being held by the police after she was arrested on Saturday for allegedly stealing a two-month-old baby in Ado Ekiti.

The suspect had lured the mother of the baby from her trading spot on Thursday to the Ekiti State secretariat on the pretence that she would benefit from free distribution of relief materials for flood victims. She took the opportunity to steal the boy.

But she was arrested on Saturday after 48 hours while attempting to leave the state.

Her arrest was made possible by members of the community aided by an officer of the Nigeria Security and Civil Defence Corps (NSCDC) at Odo Aremu, Oke Ori Omi area of Ado Ekiti.

The mother, while narrating how her baby was stolen, said Mrs Momoh had patronised her on several occasions at her shop where she sells food items and had become acquainted with her.

At the state secretariat on that Thursday, Mrs Momoh entered a few offices while the mother waited outside to give the impression she was looking for someone. She then asked the woman to help purchase recharge cards while helping her with the baby.

By the time she returned with the recharge cards, Mrs Momoh had disappeared with the baby.

Mrs Momoh, who claimed to be from Benin in Edo State, said she lives in Lagos.

She told the police during interrogation that she stole the baby from its mother because she was in dire need of a male child.

She claimed that due to her inability to bear a male child, her husband got married to another woman and may likely throw her out of the house.

The suspect is being detained at the police station along Bank Road in Ado Ekiti.

Police spokesperson in Ekiti, Caleb Ikechukwu, said Mrs Momoh was apprehended through intelligence made available to the police.

He said she would be prosecuted after the conclusion of the investigation.

‘We call on members of the public to be careful when dealing with strangers,” he warned.

“The suspect was apparently nice to the victim, that was why she got the baby easily. Citizens should not be carried away by kind strangers.”