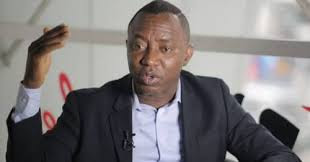 A Federal High Court in Abuja on Thursday threatened to jail the Director-General of the Department of State Services (DSS), Yusuf Bichi for the continued detention of the convener of the revolution now movement, Omoyele Sowore.

The Federal High Court on Tuesday, ordered the immediate release of Sowore.

In a notice addressed to Bichi and dated September 26, the court berated the DSS DG for not releasing Sowore despite an order to do so.

Taiwo Taiwo, the judge, said there was no subsisting order keeping him in detention.

But the DSS is yet to comply with the order. Owing to the non-compliance, Femi Falana, Sowore’s counsel, went to court seeking the execution of the order.

The court noted in a notice that the failure of the DSS to release Sowore will amount to contempt of court.

The notice entitled, ‘Notice of consequences of disobedience to order of court’ read: “Take notice that unless you obey the direction contained in the order of the Federal High Court of Justice Abuja delivered on 24 September, 2019, which ordered you to release the applicant in suit no: FHC/ABJ/CS/915/2019 forthwith, you will be guilty of contempt of court and will be liable to be committed to prison.

“This court has been informed that even as at today, Thursday the 26th of September, you are yet to comply with the lawful order of the Federal High Court by refusing to release the applicant namely: Omoyele Sowore, in your custody.

“You are hereby directed to comply with the court order forthwith or you will be guilty of contempt of court.”