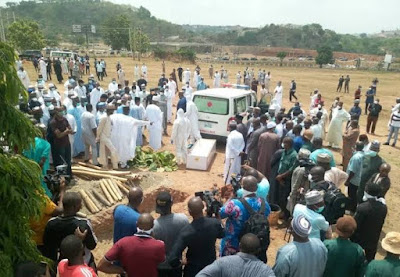 Some top aides of President Muhammadu Buhari have been denied access into the Presidential Villa in Abuja after returning from the burial of late Chief of Staff to Buhari, Abba Kyari, on Saturday.

The burial at Gudu Cemetery was attended by a large crowd – most of whom had no nose mask or hand gloves on them for protection against Coronavirus.

The burial ceremony was aired on several television stations across Nigeria and the large gathering, against government’s order, was seen by all violating the rule.

“President Buhari is not happy that the aides decided to violate clear protocols and guidelines of the NCDC and he directed that they should keep off the Presidential Villa to undergo self-isolation,” a Presidency official told SaharaReporters on Saturday.

Kyari’s death was announced on Friday by the Presidency after weeks of battling with Coronavirus.