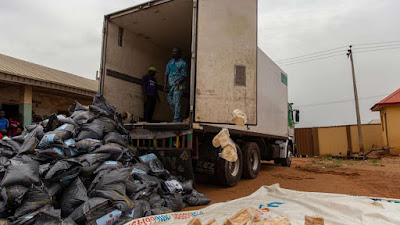 Some palliatives meant to be shared among the people in Limawa Community in Minna to cushion the effects of the lock-down have been discovered to be on sale in the markets, The Nation reports.

This has led the local government Chairman to set up the committee to see into the disappearance of the palliative from the proposed distribution spot to the market.

The Chachanga local government committee on COVID-19 had given a group of persons the directive to distribute allocated food palliatives to Limawa ward in Chanchaga local government area where the first coronavirus positive case was discovered in the state.

This is following the directive of total isolation of the community due to the discovery and led to the government giving the area special preference in the distribution of palliatives.

It was learned that not less than 13 bags of rice, 14 bags of millet and 15 bags of maize in addition to several cartons of spaghetti disappeared from the bulk initially brought to the ward for distribution.

It would have gone unnoticed if the Vice Chairman of Chanchaga local government area had not stumbled into some of the items displayed on the same in the market.

He raised alarm and inquiry from the traders revealed that they got it from some unknown persons who wanted to dispose of the grains at a very low rate.

The Vice-Chairman then reported the incident to the Chairman of Chachanga local government area, the state governor and the Taskforce on COVID-19.

He alleged that a member of the task force is involved in the illegality calling for a probe to be conducted.

The Chairman of Chanchaga local government area, Alhaji Ibrahim Abubakar Bosso confirmed the incident saying that the Council has begun an investigation into the disappearance of the food items meant to be palliatives.

He said that the local government security committee has been assigned with the task of unravelling how some of the goods disappeared after being presented at the headquarters of the Limawa ward.

Bosso said the committee will submit its report on Wednesday.