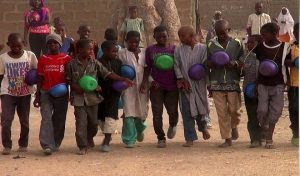 The Director of Press in the office of the Secretary to Government of the State (SGS), Alhaji Abdullahi Yar’adua, disclosed this in a statement made available to journalists on Wednesday in Katsina.

The statement asserted that the SGS, Alhaji Mustapha Inuwa, received the almajiris on behalf of the state government. Inuwa was quoted to have expressed happiness that Katsina and Kano were now taking the same measures toward curtailing the spread of COVID-19 in the two states.

He explained that the state government had already closed down both Islamiyya and Qur’anic schools, and returned the almajiris to their parents including those from Niger Republic.

He thanked the Kano State Government for making adequate arrangements in profiling and quarantining the almajiris before handing them over.

The SGS announced that all the children would be taken to the NYSC camp in Katsina for another round of health examinations from where they would be transported back to their various local governments across the state.

He strongly advised parents to desist from sending their wards to unknown places thereby exposing them to social dangers under the guise of seeking for religious knowledge.

According to him, it is the responsibility of parents to ensure proper upbringing of their children, which is totally lacking in the almajiri system.

The statement noted that the Kano State Commissioner for Education, Alhaji Muhammad Majidadin-Kiru, who handed over the pupils at Gidan Mutum-daya, a border town between the two states, appreciated the quick response of Katsina State government.