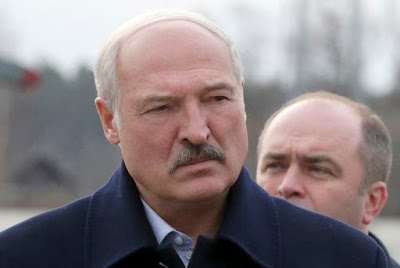 Daniil Lipilin is sure his father, Vasil, a 50-year-old paramedic with more than 20 years of experience, died of COVID-19. He says the name of the coronavirus disease is right there on the death certificate.

But Belarusian President Alyaksandr Lukashenka has refused to acknowledge that COVID-19 has claimed even one victim in the country of some 9.5 million — despite his own government’s tally, which puts the death above 50 and rising.

While most countries in Europe and around the world have instituted lockdowns and other restrictions to slow the spread of the highly contagious novel coronavirus, Lukashenka, in power since 1994, has refused to budge, dismissing the pandemic as a “psychosis” and falsely suggesting the disease can be warded off by a trip to a sauna or a tractor ride.

Hospitals across the country are reported to be stretched with doctors housed in hotels, dormitories, and elsewhere to handle the rising number of cases.

The World Health Organisation, which had praised Belarus for its early testing, recently urged Lukashenka’s government to institute tougher measures to contain the coronavirus due to fears the outbreak in the country had entered a “concerning” new phase.

One journalist who cast doubt on the government’s coronavirus claims found himself accused of corruption, in a case media rights groups said was a clear attempt by Minsk to squelch those contradicting the official narrative on the government’s handling of the pandemic.

‘What Is Going On In Our Country?’

For Daniil Lipilin, it all just makes no sense.”What is going on in our country? I, the only son of Vasilya Georgievich [Lipilin], have in my hand confirmation, on paper, that it was CV-19 [COVID-19],” Lipilin told RFE/RL’s Belarus Service. “Why aren’t they taking these statistics seriously? What are they trying to achieve? I honestly don’t understand it,” he said.

Lipilin, 20, said his father was almost never ill while working more than two decades as an ambulance medic in Barysau, about 80 kilometers northeast of the capital, Minsk.

“He got sick sometime around March 26. He felt bad — had a temperature, all the classic symptoms [of coronavirus] that everyone knows today,” Lipinin explained.

Lipilin, 20, said his father was almost never ill while working more than two decades as an ambulance medic in Barysau, about 80 kilometers northeast of the capital, Minsk.

“He got sick sometime around March 26. He felt bad — had a temperature, all the classic symptoms [of coronavirus] that everyone knows today,”

His condition worsening, Lipilin went to a local polyclinic in Barysau where he was prescribed antibiotics and sent home.

“He did everything he was told, but he didn’t get better. His temperature remained the same, 39.5. Our polyclinic said: ‘Stay home and get better.’ No one suggested he go to hospital.”

By April 4, Lipilin said, his father couldn’t speak. As his condition deteriorated dramatically, his father was hospitalized.

“There, he was admitted with a high temperature to an intensive care ward. His condition continued to worsen and he was put on a respirator. One of the staff made it clear that his chances were not great,” he said.

On April 5, Vasil Lipilin tested negative for the coronavirus. However, a second test on April 7 turned out positive, his son said. One day later, he was dead.

“On April 8, they called from the hospital and said: ‘Your father is gone,'” Lipilin said.

Belarusian Health Minister Uladzimer Karanik appeared to refer to the death of Vasil Lipinin at a coronavirus-related press conference in Minsk on April 17.

While not referring to him by name, Karanik said the death of a paramedic in Barysau did not necessarily have to be connected to coronavirus.

Instead of COVID-19, Belarus has put down to pneumonia many deaths that seemed at least connected to the coronavirus.

On the death certificate for Vasil Lipinin, pneumonia is also listed as well, his son said.

“I took the body from Minsk and talked to the pathologist who issued the death certificate. It clearly states: coronavirus and double pneumonia,” Lipilin said.

According to information released at the April 17 press conference, at least 419 medical personnel in Belarus had been infected, including 90 paramedics.

But Lukashenka has found a way to avoid acknowledging the toll.

On April 13, he declared that “no one will die of the coronavirus in our country,” according to the state news agency BelTA.

He then qualified that false claim, asserting that fatalities connected to the coronavirus were the result of underlying health conditions, adding, “Therefore, I say that not a single person died purely from the coronavirus.”

The Health Ministry did not respond to requests from RFE/RL’s Belarus Service for clarification of Karanik’s remarks regarding the Barysau paramedic.