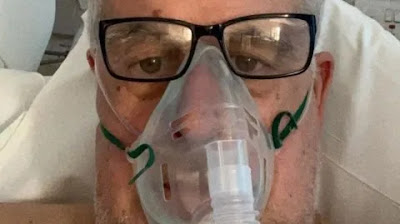 A father who battled coronavirus in intensive care has revealed how doing ‘deep breathing’ exercises prevented him from needing a ventilator.

Rob Thomas, 59, was nicknamed the ‘king of breathers’ as he underwent treatment at Gloucestershire Royal Hospital. He was discharged on Sunday, and a video of him hugging his tearful wife Viv has since gone viral online.

Speaking today on Good Morning Britain, he explained that his sister, a nurse, had told him to ‘just keep breathing’ after he was first admitted into the ICU.

He said: ‘I took these words with me. In the ICU, that’s all I did. I made them sit me upright because I felt like I was suffocating on my back.

Rob described his time in intensive care as ‘very isolated’, stating that he was ‘kind of out of it’ for the first three days. At the time, doctors told his family he had just a 50% chance of survival.

He had initially fallen ill with sepsis on March 30, for which he was sent home with antibiotics. But just days later he started showing symptoms of Covid-19, including a fever of 44 degrees.

His wife Viv, who has been married to him for 40 years, said the family’s world ‘fell apart’ when he was taken away in an ambulance. He then tested positive for coronavirus in hospital

She continued: ‘He was somewhere where he knew no one and he was so ill. I couldn’t be there to hold his hand or give moral support. My family kept me going, just the support of everyone has been amazing.’

Rob was moved from the ICU to a high dependency ward before he left hospital on Sunday. In a moving clip, he can be seen walking slowly towards Viv, who then hugs him and bursts into tears.

The family have since heaped praise on NHS staff who aided his recovery, calling them ‘fantastic’ and thanking them for their dedication and hard work.