Kanye West Officially A Billionaire According To Forbes Magazine 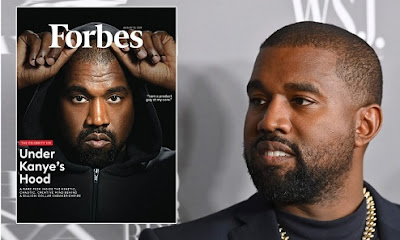 Kanye West is officially a billionaire, according to Forbes magazine.

The outlet says the rapper and fashion designer, who has long coveted the status, provided an eye-catching glimpse into his personal finances and valued his net worth at a whopping $1.3 billion.

The figure includes valuing his stake in the Yeezy sneaker line, which Forbes describes as "one of the great retail stories of the century," at $1.26 billion .

Added to that, Forbes said the statement of assets supplied to them by West's team lists $17 million in cash and 35 million in stocks.

West's other notable assets, according to his team, are $81 million in property and 21 million in land.

West and his wife, the reality TV star Kim Kardashian, are known to own several properties in Los Angeles and Wyoming.

There is also the matter of the rapper's music. The 42-year-old is one of the most biggest-selling artists of the last 20 years.

In total, his GOOD Music and the rights to his back catalogue is worth at least 90 million, Forbes said.

However, Forbes, which stressed there was a lack of independent verification for the figures, also listed West as having debt of about $100 million.

That adds up to the $1.3 billion total, the magazine said, placing him above sister-in-law Kylie Jenner, who has a comparatively modest $1 billion net worth, largely from her cosmetics business.

Despite now being officially classed as a billionaire, West was unhappy with Forbes and claimed they had undervalued him.

"It's not a billion," West reportedly text them. "It's 3.3 billion since no one at Forbes knows how to count."

He had been left displeased with an article from the magazine last year, in which Forbes refused to class him as a billionaire.

His ire was further provoked earlier this month when Forbes released its annual billionaires list, with West's name absent.

"You know what you're doing," West is said to have texted a Forbes journalist. "You're toying with me and I'm not gonna lye down and take it anymore in Jesus name."

West is said to have texted a reporter it was a "disrespectful article," that was "purposely snubbing me".