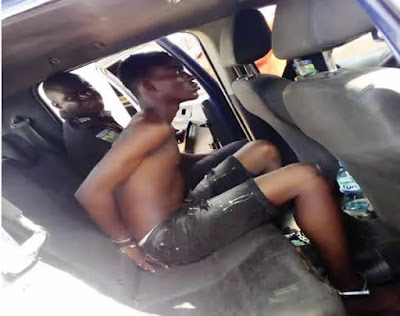 An occupant of Taiwo Street, Mafoluku, Oshodi area of Lagos, Taiwo Eluyemi, dispersed some neighbours who came to his apartment to watch movies on Wednesday in compliance with social distancing rule to curtail the spread of coronavirus.

He never knew the action would cost him his life 24 hours later.

One of the neighbours identified simply as Habeeb, who was upset by Eluyemi’s action reportedly ambushed him along the street on Thursday and hacked him to death.

City Round learnt that Eluyemi was popular in the neighbourhood, a personality that attracted people to his house.

It was gathered that Habeeb, who also resides on Taiwo Street, and his friends stormed Eluyemi’s house on Wednesday to watch movies but he turned them back on the grounds that his apartment was becoming crowded.

Eluyemi’s countenance was said to have angered Habeeb, resulting in an altercation between them.

A tenant in the area, Tope Akande, told said some people intervened and both parties went their separate ways.

He said Eluyemi was returning from a church with his son when Habeeb waylaid him and stabbed him in the back and hand.

He stated, “There was a misunderstanding between Mr Eluyemi and Habeeb on Wednesday. Habeeb and his friends went to the man’s house to watch movies but he (Eluyemi) was not comfortable with it in the light of the social distancing everyone is trying to observe to avoid contracting coronavirus.

“He asked them to leave which led to a disagreement but it was later settled amicably. The man went to pick his son from the church not knowing Habeeb was already looking for him. He attacked the man with a cutlass and inflicted injuries on his back and left hand. He bled to death on the spot. The suspect has been handed over to the Makinde Police Station.”

A source in the community disclosed to City Round that Habeeb and Eluyemi had an issue sometime ago which was triggered by the Wednesday face-off.

The source said, “People usually go to his house to watch European League matches and movies. He was popular on the street and his house was opened to youths. The suspect had also been going there. As a result of the present situation, he didn’t want people to gather in his apartment again.

“The suspect and some youths went there on Wednesday afternoon and he told them to go away. It was after the incident happened on Thursday that I learnt they (Habeeb and Eluyemi) had a misunderstanding sometime ago. The suspect should be in his late twenties, while the deceased is in his forties.”