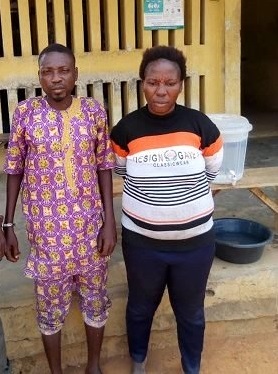 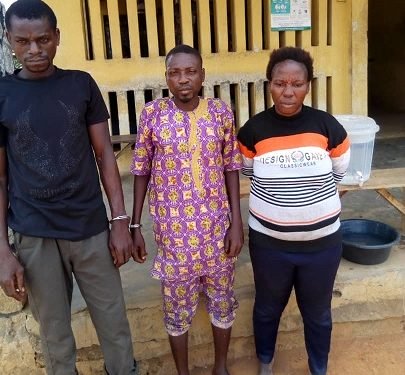 The Police in Ogun State have arrested a herbalist, Lajuwon Ogunleye and his wife Adetutu Apalaya, for conspiracy and murder of their seven-year -old son, Pelumi Apalaya, for ritual purpose.

Also arrested along with the couple is one Fatai Sefiu in connection with the ritual killing of the boy.

The suspects were arrested on April 22 following an information received by the police at Abigi Divisional Headquarters that the seven year old boy who didn’t show any sign of illness, suddenly slumped and died.

This it was learnt, arouse the suspicion of some people around that the boy might have been used for ritual.

Upon their suspicion, the people started monitoring the herbalist who incidentally happened to be the step father of the deceased boy and his wife, who is the mother of the boy.

Unknown to them, they were monitored to the bush where they took the corpse for burial in company of the third suspect who happened to be a friend of the herbalist.

It was discovered that the boy was buried in an upright position after the suspects had harvested some body parts from the corpse.

The Police Public Relations Officer, Abimbola Oyeyemi, who disclosed this in a release, said upon confirmation of their suspicion, the people quickly alerted the police.

Abimbola, a Deputy Superintendent of Police (DSP) added that the Divisional Police Officer for Abigi Division, Tarkighir Joseph led detectives to the bush in Iwopin area of Ijebu waterside where the suspects were rounded up.

He stated: “The suspects led policemen to where the victim was buried and it was discovered that the deceased was buried in standing position.

” On interrogation, the second suspect, Fatai Sefiu, told the detectives that the boy was actually used for ritual by the stepfather in connivance with the deceased boy’s mother. He stated further that the couple have reached a conclusion before he was coopted into the business.

“The mother of the victim Adetutu Apalaya who first denied having knowledge of her husband plan to use her son for ritual was dumbfounded when asked whether or not she followed them to the bush where her son was buried and the mode of burial of the boy.”

According to the Police Spokesman, the Commissioner of Police, Kenneth Ebrimson, has given directive for the transfer of the case to homicide section of the State Criminal Investigation and Intelligence Department(SCIID) for further investigation and prosecution.