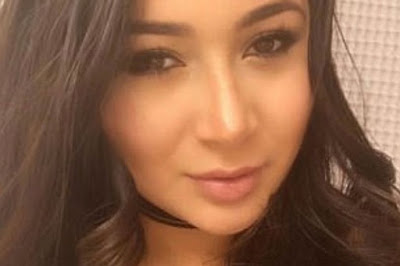 With any passionate relationship, there is a fear of losing the one you love – and that can make you go to extreme lengths to keep hold of them. That was certainly the case with Raphael Lolos. He was a man desperately trying to keep his romance on track, but he was going about it the wrong way.

Lolos, 43, and Jenny Londono weren’t just dating, they were also in business together, so it was a powerful melting pot as they tried to balance work and their private lives.

Hardworking Jenny, 31, was a woman known for her sweet disposition, but she was also keen to make something of her life and her ambition had driven her into business with Lolos.

In 2016, they started running the Luna Lounge in Englewood, New Jersey. It was a popular bar and while Lolos was the money behind the venture, Jenny was the manager. After a grand opening, it became a hot spot for party-goers.

Jenny had a natural rapport with the customers and was key to the bar’s success. They said she was a breath of fresh air and her happiness was infectious.

But by 2017, Lolos started getting paranoid about Jenny seeing someone else. There was no evidence to suggest Jenny was unfaithful, but that didn’t stop Lolos putting a tracking device on her car to follow her movements for two weeks.

The couple didn’t live together so when they were apart, Lolos made sure he knew where she was at all times.

Even though Jenny didn’t know she was being tracked, she certainly knew there were problems. Texts between the pair showed there were tensions as they struggled to deal with the blurring boundaries of being lovers and business partners.

They argued about lots of things – including money. Lolos sent messages accusing Jenny of being a ‘gold digger’ but then followed up with texts begging for forgiveness and promising he loved her. The mixed messages were making emotions run high.

In the early hours of June 25, 2017, Jenny closed up the bar and was seen on CCTV leaving with Lolos. It seemed that despite the issues between them, they couldn’t bear to be away from each other and they went back to Jenny’s apartment.

But then Jenny went missing and any problems they were having were insignificant in the quest to find her. Jenny’s family and Lolos teamed up to try to track her down and work out what had happened.

He said he had left her place and she was fine. It was very unlike Jenny to make people worry and yet her credit cards were being used, so police struggled to work out whether Jenny was just out of contact or in trouble.

Then two days later, a member of the public saw the lower part of a female torso floating in the Hudson River off a Brooklyn pier. A few days after that, a left leg was also found in the waters with pink painted toenails, and then a right leg was discovered. The head and arms were never found.

DNA tests showed the body parts all belonged to the same woman, but police didn’t know who. In an attempt to identify the victim, the New York police made the unusual move of releasing a picture of a tattoo they found on the right hip. It was a word in the Sanskrit language.

Jenny’s mum, Gladys Quintero, saw the image on the news and knew straight away it was her daughter. The inking was a tribute to Jenny’s late aunt and meant ‘Lily’ or ‘Lilyann’.

Lolos drove Jenny’s mum to New York so she could identify the remains. They were devastated when the body parts were confirmed to be Jenny. Now her disappearance was a murder investigation.

Straight away police looked into who had been using Jenny’s credit cards. They discovered Lolos had left Jenny’s apartment to go shopping the day she went missing. He bought a box of rubbish bags first then he drove to a different store to buy two meat cleavers – all with Jenny’s credit cards.

Then later that night, he made a trip across the George Washington Bridge into Manhattan and could be placed in an area along the Hudson River by his mobile phone records. Lolos went home and never returned to Jenny’s apartment. It would be two days later when the torso would surface.

Could it be that Lolos had killed Jenny and used the meat cleavers to dismember her? It was a grisly thought that a man would do that to the woman he loved, but the evidence was compelling. A SWAT team took Lolos into custody and he was charged with murder.

At the two-month trial in 2019, the prosecution said Jenny had been murdered in her own apartment in Edgewater by Lolos who was fuelled by jealousy. They said he was obsessed with Jenny and was devastated when he suspected she was cheating on him.

While the defence argued Lolos had avoided texting Jenny in the weeks leading up to her death, which suggested their ‘imperfect relationship’ didn’t mean enough to him to murder her, there was also the problem of physical evidence.

‘The state has no proof of how Jenny actually died,’ they said. ‘They have no proof where she was when she died.’Jenny’s apartment didn’t show signs of a struggle and there were no traces of blood in the bath, which is where the dismemberment was alleged to have taken place.

The defence said it proved Lolos was innocent while the prosecution said it was proof of a cover-up. There was no trace of Jenny’s DNA at all in the bath, which made no sense.

‘Not a hair follicle, not a piece of skin, not a drop of blood,’ they said. ‘Sometimes the absence of evidence is compelling.’ It suggested the tub had been scrubbed clean to hide something. No regular person’s bath would be that clean.

In December, after three days of deliberations, the jury found Lolos guilty of murdering and dismembering Jenny. He was convicted on other counts including stalking and stealing credit cards.

There was an audible sigh of relief around the court when the verdict was read out. Lolos was handcuffed and led away.

In February this year, Lolos was sentenced to life in prison. He will have to serve 63 years before being eligible for parole. It was the maximum he could have received.

Lolos was also sentenced to five years each for desecrating human remains, hindering apprehension, stalking and another 10 years for multiple credit card fraud charges, which will all run concurrently with the life sentence.

Jenny’s mum, Gladys, struggled to hold back her tears as she spoke through the help of a Spanish translator. ‘I want the judge to know that man destroyed my life,’ she told the court. ‘She was my little girl. My daughter.

'The one I most loved in this world. He ended me and he ended my family.’ Gladys continues to be haunted by the knowledge that not all of her daughter’s body has been found.

Jenny had been trying to build a life for herself and become a success, but she was stalked, murdered and butchered in her own home by the man who had promised to make her dream come true.