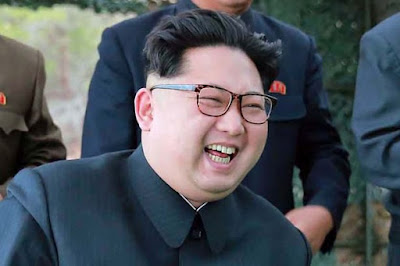 He's the enigmatic leader of North Korea - a country shrouded in such mystery it's not currently known for certain if Kim Jong-un is alive or dead.

Reports emerged over the weekend claiming the dictator had died, or been left in a "vegetative state" following a botched heart surgery.

The surgeon was said to have made a mistake because his "hands were shaking so much".

But just as quickly as the rumours started, North Korean media sought to stop them and has reported the hermit state's leader has spoken over the weekend.

It has been reported that Kim had thanked workers on the project in the city of Wonsan, where a train believed to be his has been spotted in satellite images amid unverified reports that he is either dead, in a vegetative state or "alive and well".

Kim's whereabouts and the status of his health remain a mystery as he has not been seen in state media reports since April 11, the day before he reportedly had the operation.

It is just the latest in a long line of bizarre stories surrounding the controversial leader - from feeding his uncle to dogs to executing a general in a James Bond-inspired killing.

Kim Jong-un's weight has ballooned in recent years to a massive 20-stone, said to be fuelled by his obsession with Swiss cheese.

And his waistline isn't the only thing that's suffered. The leader is said to be suffering from the painful condition, gout, because of his love of the fatty food.

As far back as 2014, he was spotted limping at the anniversary of his grandfather's death.

He said: "Based on his gait, it appears he has gout - something due to diet and genetic predisposition that has affected other members of the Kim family."

Kim's love of cheese is said to stem from when he was a student in Switzerland.

He was special shipments delivered and has also sent envoys to France to try to enrol North Korean cooks on cheese-making courses.

In 2014, Kim reportedly had to briefly retreat from public life after eating too much Emmental cheese, after a large shipment of it arrived from Switzerland.

He might not look the type but Kim Jong-un appears to be a massive fan of music and even formed his own girlband.

Moranbong is one of the most famous bands in North Korea and were founded by the leader himself.

The band, known for their military uniform-style costumes, extravagant shows and synthesizer-backed anthems, were among the country’s delegation to the Winter Olympics in Pyeongchang, South Korea, in 2018.

A year later, the girls were all put on a regimented diet to standardise their waistlines, according to North Korea watchers Sino-NK.

And not surprisingly, most of the girl band’s songs appear to be about the North Korean leader himself.

“How can he be so kind,” the lyrics to one ballad go.

“His smile is so warm and sweet. I have no choice but to be taken by him and his warm heart.”

And managing the style of his girlband isn't the only thing Kim is keen on controlling - he wants to influence the hair of everyone in the country.

Young men have been told to model their hairstyle on the supreme leader’s own eccentric style, where the sides and back of the head are almost clean shaven and only the top is left.

Young men are supposed to wear their hair in a bobbed cut like Kim’s wife Ri Sol-ju.

Only performers are now allowed to grow their hair, according to reports.

A Pyongyang source said that the order was being enforced in the country’s universities, where “university student monitors are walking around with scissors and cutting off the hair of offenders.”

Kim himself, however, is believed to be scared of barbers, so he cuts his own hair.

Kim has been a basketball fan since he was a teenager and would spend hours drawing his favourite player, Michael Jordan.

His dreams to meet one of his heroes finally came true in 2013 when Rodman visited North Korea.

At the time Rodman said: "My mission is to break the ice between hostile countries. Why it’s been left to me to smooth things over, I don’t know. Dennis Rodman, of all people.

"Keeping us safe is really not my job; it’s the black guy’s [Obama’s] job. But I’ll tell you this: If I don’t finish in the top three for the next Nobel Peace Prize, something’s seriously wrong."

And following his trip he described Kim, who was introduced basketball to his country, as a "friend for life".

Since then he has been back to North Korea several times, with his last visit in 2017.

And finally, the world's most secretive leader is so paranoid about people finding out about his dietry habits, he travels everywhere with his own toilet.

However, it would seem a rather useless addition to his packing because North Korean media say he never need to use it.

Among the claims made by state media about Kim is that he doesn’t need to defecate or urinate, supporting the view that he is practically a god and supernatural in nature.