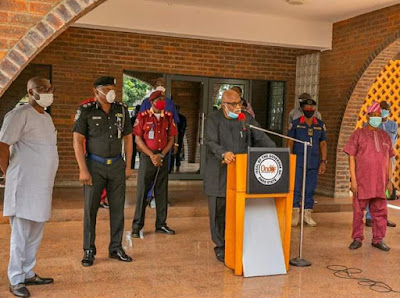 He made this known at a news briefing on COVID-19 update yesterday in Akure.

The governor explained that the fourth and fifth cases occurred on Saturday, while the sixth, seventh and eighth cases were discovered on Sunday.

“The fourth and fifth cases, who are officers of the Police Command in Lagos State, were clear evidence of panic, disobedience, lack of discretion and reckless disregard for the well-being of others.

“The fourth case, the policeman, resident in Lagos, upon noticing symptoms of the viral infection, reported, got tested at Yaba and was told to wait for his results on April 20.

“On Wednesday, April 22, without his test results and any medical clearance, proceeded on an unfortunate journey to Akure where his family is based and got a message of his positive result on Thursday, April 23.

“He returned to Lagos late Thursday, claimed to have called the health authorities to fetch him for quarantine and treatment, but when they didn’t show up, he came back to Akure on Saturday in company of the fifth case.”

“His health status was discovered and he was immediately taken and placed on admission at our Infectious Disease Hospital (IDH) where he is undergoing treatment,” he said.

Akeredolu further explained that the sixth case was a murder suspect arrested in Edo and transferred to Ondo for trial of crime earlier committed in the state.

According to him, the seventh case was a female civilian who sneaked into Ondo from Abuja, while the eighth case was discovered in Owo and samples taken were confirmed positive late last night.