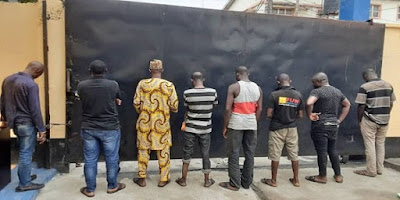 Seven inter-state buses with 95 passengers billed for night travel have been impounded by police in Lagos just before they took off, the command said on Sunday.

The buses were discovered around 8pm on April 21 in the Bhojson area of Ebute Metta preparatory for departure for Benue, Abuja and Ilorin, spokesman Bala Elkana said in a statement.

Elkana said drivers and passengers were charged to court, adding that they were among 620 violators arrested in one week from various parts of the state and charged to court for violating restriction order.

Others included the Imam of Sheik Central Mosque, Mile 12 Ketu, Suleiman Abubakar, alleged to have held evening prayers (Maghrib and Isha prayers) in the mosque with a large number of worshippers on April 24.

Similarly, Elkana said police operatives at Idimu arrested 39 alleged strippers and clubbers around 1:30am on April 24 at a hotel in the area, while 10 suspects were held for organising a party at Lekki Garden on April 23.

He said, “On April 23, at about 10:30pm, operatives from Maroko police station arrested 10 suspects for organising a party at Lekki Garden. The suspects were arraigned in court on three counts and found guilty as charged. They were sentenced to six months imprisonment and community service, to run concurrently.