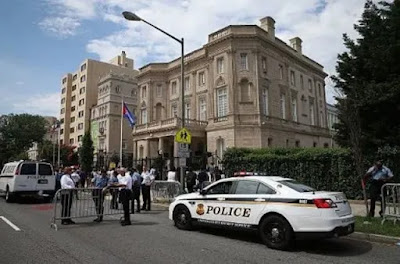 A man was arrested early Thursday after opening fire on the Cuban embassy in Washington, the US Secret Service said. No one was injured.

The unidentified person fired multiple rounds from what some reports said was a high-powered assault rifle.

“This morning at approximately 2:15 am, US Secret Service officers responded to the Embassy of Cuba following reports of shots fired,” the Secret Service said in a statement.

“No injuries were reported at the scene.”

The administration of President Donald Trump has chilled relations with Havana after they were opened up by his predecessor Barack Obama.

In October 2017, it expelled 15 Cuban diplomats after a rash of incidents in which US embassy staff in Cuba reported as yet unexplained head pains, dizziness and hearing loss.

US Secretary of State Mike Pompeo, however, on Wednesday criticized South Africa and Qatar for accepting doctors from Cuba to battle the coronavirus, accusing the communist island of profiting from the pandemic.