Covid-19: Father Who Rejected Son For Sneaking Into Ekiti From Lagos, Gets Government Appointment 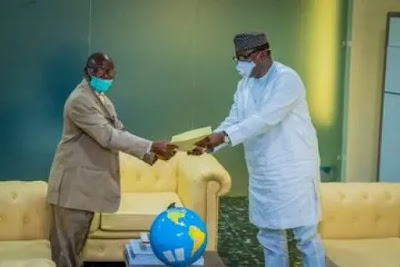 The Governor of Ekiti State, Kayode Fayemi has appointed man in trending video, who rejected his son for sneaking into Ekiti state from Lagos state, as a COVID-19 Response Ambassador in Ekiti.

The man, identified as Mr. Adeoye, who is a former road safety officer, rejected his son due to the fear that Lagos remains the epicentre of Coronavirus in the Country, and did not want to take chances by allowing his son into his house, who according to him, might have been infected.

The government made the appointment known in a tweet on Thursday afternoon, stating that Mr. Adeoye represents the kind of self-discipline, selflessness, and sense of collective responsibility that Ekiti State and Nigeria need desperately today to progress.

“Today, I appointed Mr. Adeoye, father of the young man who sneaked into Ekiti state, as a COVID-19 Response Ambassador in Ekiti State. I am proud of Mr Adeoye as a principled Ekiti man and I salute his courage in helping us keep Ekiti safe.

“Mr. Adeoye will help to propagate the message as a member of the COVID-19 Task Force @Ekiti_COVID19 in the State”‘

The government further stated that Ekiti State will in future recognise Mr. Adeoye’s valour as an example of the rebirth of Ekiti Values Orientation which is the central focus of Governor Kayode Fayemi’s administration.

Meanwhile, Ekiti State Government ordered the indefinite suspension of one Sola Durodola, a member of the Covid-19 Task Force over incompetence and highhandedness.

It was gathered that Durodola was the one who shot the video where he was making a mockery of the father, who had come to report his son, for violating the stay at home order.

In the video, Durodola who is not a health official also certified the suspect as free of COVID-19, a situation that generated negative reactions.