Cleric Arrested For Keeping Young Girls In His Almajiri School 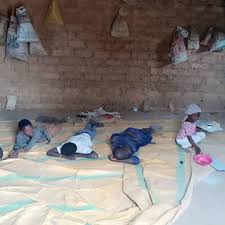 The Kaduna State government has arrested a cleric, Aliyu Maikwari, in Zaria for allegedly keeping young girls in his almajiri school.

According to DailyTrust, the government said it has evacuated 327 out of 500 other children from the house ‎where the children were being accommodated.

Speaking to newsmen, the Commissioner for Human Development and Social Services, Hajiya Hafsat Baba said out of the almajirai evacuated, 17 were girls between the ages of 8 and 10 and were mixed up with other older boys in the same house.

She described the situation as against the teaching of Islam and blamed the parents of the girls for giving out their daughters to the man.

"When I was told I couldn't believe it until I saw the pictures. Young girls of not more than eight to 10 years were mixed up with these boys.

"We were able to evacuate 327 out of the 500 children in the house‎. Because he was so stubborn we had to use operatives of 'Operation Yaki' to arrest him.

"We also understand that he gives out these girls for marriage. He is now under investigation in Kaduna," she said.

She said the cleric was arrested as part of the state government's operation to evacuate almajirai from the state and send them back to their parents to curtail the spread of the COVID-19.