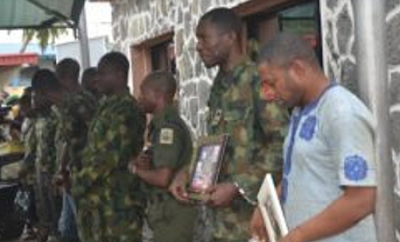 Operatives of 81 Division of the Nigerian Army on Thursday paraded 13 people who were arrested for impersonating military officers and perpetrating criminal activities during the ongoing lockdown in Lagos.

The suspects, who were arrested in various parts of Lagos, were paraded by the General Officer Commanding (GOC), 81 Division, Major General Olubunmi Irefin, at the Division’s Headquarters.

One of those arrested decided to pose as a Major in the army because of constant disturbance by landgrabbers.

The suspect, Allen Afolabi, said that he impersonated the army to scare landgrabbers who were disturbing him within his residence in Sango.

“When I was trying to build my house in Sango, people came to me that I could do photo-editing to impersonate the military to scare landgrabbers. Now, I regret my actions,” he said.

Irefin said: “One thing the lockdown has done for the state is that our Operation Checkmate, initially meant to check the soldiers from breaking the law, is yielding more results than we had planned.

“Today, we have 13 impostors that are being paraded; we have a Lieutenant Colonel and a Major among them. And you will be shocked at the level at which they are impersonating the army.

“The Lt-Col. has a picture frame, the same with the Major, and when you check their internet pages, they are there as military personnel.

“They use letter-head papers alleged to have belonged to the Nigerian Army to apply for visas. Unfortunately for them, that is the wrong channel of applying for visas because we don’t do it directly,” he said.

The GOC appealed to law-abiding citizens in other security agencies to be wary of such impostors.

“That is the problem we are having in Lagos state and when all these impostors create problems within Lagos state environment or Ogun, they will say it is the Nigerian Army.

“I want to use this medium to appeal to law-abiding citizens and other security agencies that on occasions where they see soldiers on the road, they should be bold to ask for their identity cards.

“When they have doubts, they should call or make contact with military units and we will be able to make arrest,” he said.