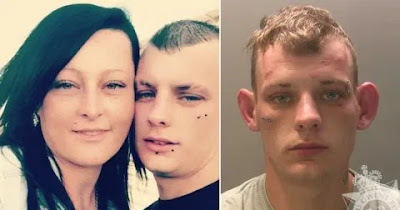 A jealous boyfriend flew into a rage after finding out his partner had several male friends on social media.

Kieron Shaw, 27, has been jailed for attacking Samantha McCulloch, 25, with a pickaxe when he found out she added more than a dozen male friends on Facebook.

A judge branded him a ‘coward’ for the assault and smashing her phone when she tried to get help at their home in Abercarn, South Wales, last November.

He had accused her of cheating when he found the list of male friends on her device.

She suffered scratches and bruises to her chest plus scratches to her neck and hand.

Prosecutor Lisa McCormick said: ‘The victim had been in the relationship for ten years. He attacked her in a fit of jealous rage at 2.30am.

‘He was screaming insults and accusing her of adding male friends on Facebook.

‘He grabbed her by the hair from behind and she hit her head and fell to the floor. He was armed with a red-handled pickaxe and a potato peeler.’

Cardiff Crown Court heard Shaw downed a quarter of a bottle of gin before smashing her mobile phone when Samantha rang for help.

Her mother arrived but Shaw threatened to smash her car window with the axe.

Samantha ran to her mother and called 999 in a ‘highly distressed’ state.

Shaw claimed he was acting in self-defence – saying she had tried to push him down the stairs following an argument about Facebook friends.

He was jailed for eight months.

Judge David Wynn Morgan added: ‘Men who attack women are cowards and you are a coward.

‘This was a sustained attack. It was motivated by jealousy and spite.’