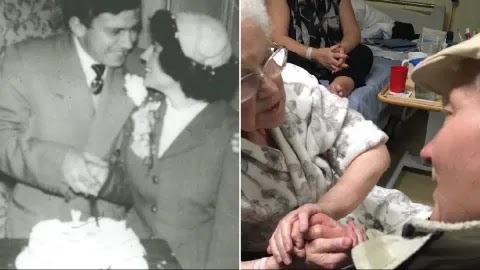 A pensioner suffering from coronavirus turned down life-saving treatment after his wife of 63 years died of the disease.

Bill Dartnall, 90, refused to wear his oxygen mask after learning about the death of his partner Mary, 81, who had also tested positive for Covid-19. The couple, from Southampton, had been together since the 1950s and passed away on the same day, just five hours apart.

After falling ill last week, Mrs Dartnall became unresponsive and was taken to Southampton General Hospital where she was diagnosed with the virus. A few days later her husband suffered a stroke and was admitted to the same hospital, where he too was found to have the killer bug.

The couple’s two daughters, Rosemary and Ann, said their dad ‘would not have wanted to live without mum’, describing their deaths as a ‘double tragedy’.

Rosemary told the Daily Echo: ‘When he was told that Mum had passed away he tried to pull the mask off his face and made it clear he didn’t want any more oxygen.

‘Dad refused to wear the mask – we don’t know why exactly but he didn’t want to carry on.

‘He continued to be cared for and passed away peacefully in his sleep a few hours later.

‘Dad probably wouldn’t have wanted to live without Mum. They were very much a pair and it’s hard to imagine either of them without the other.’

The UK’s coronavirus death toll has soared to 26,000 after the government included care home numbers in the daily update.