Coronavirus: I Am Not A Wicked Dad, Ekiti Father Who Rejected Son In Viral Video Explains Action 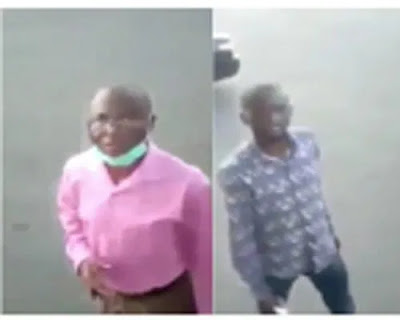 Retired Federal Road Safety Commission (FRSC) Commander Femi Adeoye, who refused his son entry into his house after sneaking into Ekiti from Lagos over COVID-19 fears, says his action was his own little way of supporting the government’s efforts at combating the virus.

Adeoye said people should not see him as a wicked father but someone who believed that the nation is greater than an individual, adding that he did what he did for the collective good of all.

The father has been appointed Covid-19 Ambassador by Governor Kayode Fayemi for his integrity and exemplary show of valour in the ongoing fight against Covid-19 pandemic.

Fayemi also made him a member of Ekiti State’s Covid-19 Taskforce which the governor headed as chairman.

Adeoye shot into limelight when a video of him insisting that his son, who returned to Ekiti from a trip outside the state be isolated for 14 days, as stipulated by the Nigerian Centre for Disease Control (NCDC) protocol for preventing community spread of Covid-19, went viral.

Fayemi, who received Adeoye in his office on Thursday, commended him for his patriotism and selflessness.

Presenting a commendation letter to him, the governor eulogised the retired FRSC officer saying his action was the hallmark of Ekiti values which the administration is promoting.

The governor, who assured that his son would soon be released to him after the 14 days quarantine, urged Ekiti people to emulate the selfless attitude of Adeoye by reporting promptly anyone who entered the state through whatever means to the appropriate authorities.

“We don’t know how many lives you have saved by this singular action because we don’t even know your son’s status yet but we pray that nothing happens to him and even if it turns out that way, he would still be safe”, he stated.

“Indeed, the state will, in future recognize your valour as an example of the rebirth of Ekiti values orientation which is the central focus of this administration”.

Responding, Adeoye expressed his appreciation to the state government and to the governor for recognizing his little contribution towards the drive to end the pandemic in the country.