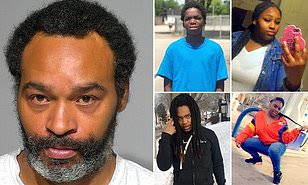 Christopher Stokes, 43, was charged with five counts of first-degree homicide by the Milwaukee County District Attorney's office for the Monday attack.

Each count carries a potential sentence of life in prison. He was also charged with being a felon in possession of a firearm.

The complaint said Stokes identified himself on the 911 call and said 'the gun is still upstairs with the bodies.'

Stokes told the dispatcher he was sitting outside on the steps. He called 911 a second time and again confessed to killing his family with a shotgun, the complaint said.

When police arrived at the house, Stokes was sitting on the steps. When an officer asked Stokes if he had heard any shots, he responded, 'Yeah, I didn't hear them, I did them,' according to the complaint.

Police discovered a camouflaged 12-gauge shotgun in one of the bedrooms with 12 spent shotgun shells throughout the house.

Milwaukee Mayor Tom Barrett said on Monday that an infant was found alive in the house.

He added that the crime scene sat in a lower income neighborhood and residents in the area were under great stress in the North Division neighborhood.

'The living conditions here-this is obviously a poor neighborhood and I don't know how many people lived in this house,' he said.

'I don't know if there was more than one family. But again, this is a stressful period and we'll have to wait and see exactly what happened here.'

The few hundred residents who crowded the crime scene were described as 'volatile.'

Distressed relatives cried while others comforted them, fights broke out, verbal arguments were had and paramedics treated a shocked family member.

Several people who approached the crime scene were not involved, but came to see the large police presence and the tragic scene unfolding outside.