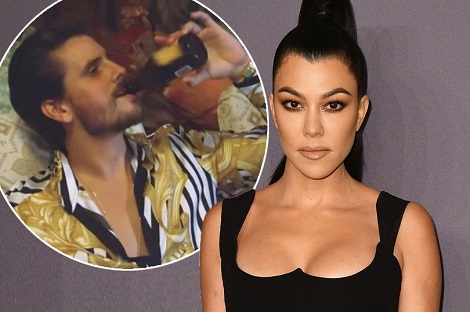 Kourtney Kardashian is said to be worried for her children's future following their father's stint in rehab.

The Keeping Up With The Kardashians star, 41, shares son Mason, 10, daughter Penelope, 7 and youngest child Reign, five, with Scott, who recently checked himself out of a rehabilitation centre.

The 36-year-old entrepreneur and reality TV star left his rehab facility after being left furious by a leaked photo.

Scott is said to be angry after a snap of him inside the All Points North Lodge facility in Edwards, Colorado was shared online.

His team believe the picture was leaked by a staff member rather than a patient.

It had been reported that Scott, who has been open about his substance abuse issues in the past, had checked into rehab to tackle addictions to alcohol and cocaine.

The star fled the lavish facility after just six days, and now the mother of his children is believed to be worried for her children following his rash decision.

A source close to Kourtney revealed that the reality TV star is rather furious with Scott as he has failed to beat his addiction, and is even more concerned by the lasting effect it will have on his children.

The insider told The Sun : "Kourtney is upset Scott is back in LA and not in treatment. Also, she's upset with how this affects their kids.

"Mason is older now, and has a smartphone. He knows what is happening, unlike when Scott struggled a few years ago."

The insider added: "Kourtney wants Scott to go to treatment and get the help he needs, especially for their kids".

Despite the fact that rumours circulated about Scott entering the facility to tackle his former addictions, his lawyer stated that his issues were much more deep rooted, and insisted that the star was actually there to work on his past traumas.

Marty Singer said in a statement: "In an effort to finally come to terms and deal with the pain that Scott has been silently suffering for many years due to the sudden death of his mother, followed by the death of his father three months later, Scott made the decision to check himself into a rehab facility last week to work on his past traumas."