Pictured! Police Officer Hacked To Death By Mob In Kenya 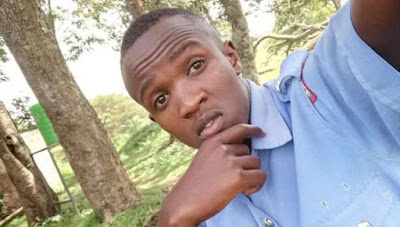 Now, police have launched an investigation to track down the culprits.

The police constable, Felix Yegon and his colleague William Ngeiywa, had been dispatched to assist a man whose wife and children had allegedly been taken away by an unidentified person at Kalwal village.

From the police report, the officers based at the Kobama Police Station, seem to have been ambushed by a machete-wielding mob and their two motorcycles burnt down.

In his report to the police, Kwabwai Chief Mark Oteng, said that Constable Yegon succumbed to his injuries at the scene of attack, having been cut on his head, neck, back and hands.

Yegon’s colleague escaped unhurt having hid himself in the home of a local following the attack, the police report said.

“Nobody was found at the scene. About 400 meters from the deceased officer, two burnt motorcycles believed to have been used by the officers were recovered,” said the police.

One of the motorcycles did not have a number plate.

The body was taken to Homa Bay County Teaching and Referral Hospital mortuary awaiting a post-mortem.