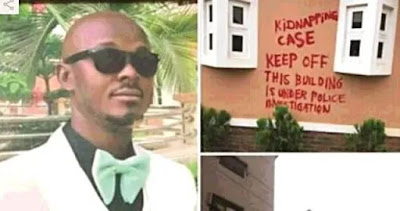 Shocking revelations emerged, over the week, that the sum of N100 million found in the bank account of the wife of late billionaire kidnapper, Collins Ezenwa, popularly known as E-money, which was suspected to be proceed of crime and was ordered to be seized and forfeited to the Federal Government of Nigeria, by the Federal High Court, Owerri, Imo state has disappeared.

The account which has a net balance of N105million at the time it was confiscated and a lien placed on it currently has a balance of N6,800 in it.

At present it was learned that detectives at the Inspector-General of Police Intelligence Response Team, IRT, were working to unravel the mystery surrounding the disappearance of the huge sum from the bank and arrest the culprits

Recall that 13 buildings, located around choice areas within Enugu, Abia and Imo states, including a hotel valued at about N220million in Enugu State, were discovered to have been purchased by the late billionaire kidnapper within the space of two years. He was also said to have bought 13 expensive vehicles including tippers and trailer trucks, while the sum of N100million was found in a bank account belonging to his wife, within the same period.

The source, while speaking with Vanguard’s Crime Guard said; “We received intelligence reports about E-money’s criminal activities in October 2017, while he was a policeman, after one Emmanuel and David Ofong were abducted along Nsukka-Kogi Road, Enugu by a gang of kidnappers and a ransom of $2 million was paid for the release of one of the victims, David Ofong while the kidnappers held on to Emmanuel Ofong, demanding additional money.

“We went into the case and through the aid of advanced technology, we were able to establish that E-money was the man behind the kidnapping but we had difficulty arresting him then because he was always moving in and out of the country.

-How he operated the gang

“Shockingly, we heard, in 2018 that he had been killed alongside two members of his gang. But since Chief Emmanuel Ofong, who he kidnapped was still missing; we continued our case with the hope of arresting other members of his gang. In the process, we arrested a banker working for him and he informed us that his wife had a fixed deposit account credited with N100 million.

“We also arrested a property agent, who assisted him in buying his property. We looked further into his activities and discovered that he was operating a gang so sophisticated that his gang members were not close to themselves and none of them knew where he kept his victims after he had kidnapped them.

“He also conducted negotiations for ransom of his victims by himself which was usually in foreign currencies. We discovered that he gave his gang members whatever he liked as he had succeeded in preventing them from knowing how much he got for the operations.

“We also discovered that E-money used, to a large extent, his police exposure in coordinating his criminal enterprise and he ended up acquiring so much money within a short period.

“Despite the October 2019 interim order of forfeiture, issued by the Federal High Court Owerri, to the Nigeria Police Force to confiscate all properties belonging to E-money, which included vehicles, buildings and the sum of N100million found in his wife, Gift Ezenwa’s account, the said N100million has been withdrawn completely,” the source lamented.