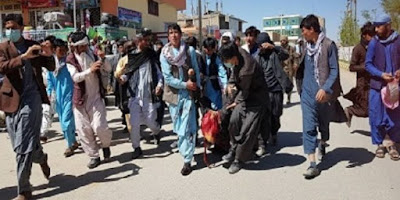 Two policemen and four other people were killed in Afghanistan on Saturday after a deadly clash at a public food donation in central Ghor province, officials said.

Hundreds of people had gathered outside the governor’s office in the provincial capital Firozkoh, where a Qatari group was distributing aid.

It was not immediately clear why the gathering turned violent, but officials blamed armed men in the crowd.

“Four civilians, including an employee of a local radio and two policemen were killed,” he said, adding that 19 people were also wounded.

He said the protesters also beat security personnel and an investigation into the incident was underway.

The interior ministry confirmed the death toll in a statement, saying “some illegal armed men in the mob attacked the government building”, which prompted police to fire into the air to disperse the crowd.

Afghan Vice President Amrullah Saleh said the attack was “shocking” and announced that the “government was seriously investigating the incident” in a Facebook post.

The aid group was distributing food to about 1,000 local families. Food drives are a common practice in the country during the Muslim holy month of Ramadan.

Afghanistan is battling a growing coronavirus outbreak that has exacerbated problems with food access in the impoverished country.